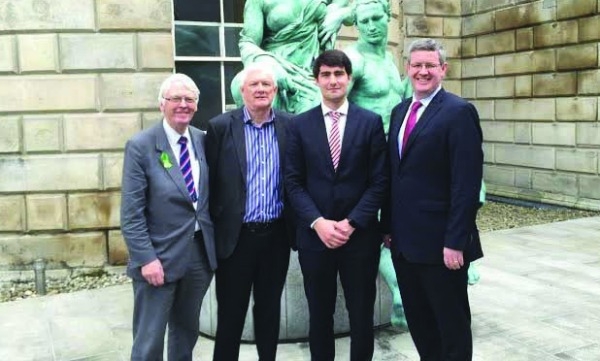 Drugs and Alcohol Taskforce commended for their ‘praiseworthy’ work in community

A meeting with the Chairman of the Tallaght Drugs and Alcohol Taskforce (TDATF) was described as encouraging and the Taskforce was commended for doing praiseworthy work in the community.

The meeting in Leinster House, was organised by the spokesperson on Drugs & Community, Jack Chambers TD in order to ascertain front-line knowledge of the operation of the TDATF and to assure Mr Dolan of the party’s support for their work.

“I was very encouraged by the meeting with Eamon,” said Cllr Paul Foley.

“We discussed many of the problems that the TDATF face in their work, but also some of the very tangible solutions his team are effecting in the Dublin 24 area.

“I was also very pleased to see that Deputy Chambers has a strong grasp of the issues at hand.”

Similarly, Cllr O’Connor was also very complimentary to the Taskforce and Mr Dolan. “For many years I’ve been working in Tallaght with the community on the issues surrounding substance abuse.

“The TDATF and Eamon do praiseworthy work in our community to tackle the scourge of drugs,” said Cllr O’Connor.

“With the end of the current National Drugs Strategy imminent, I believe it is good time for us to consider our approach to tackling drugs in our communities.

“Both Charlie and myself assured Mr Dolan of our party’s support on South Dublin County Council for the Taskforce’s work,” concluded Cllr Foley.