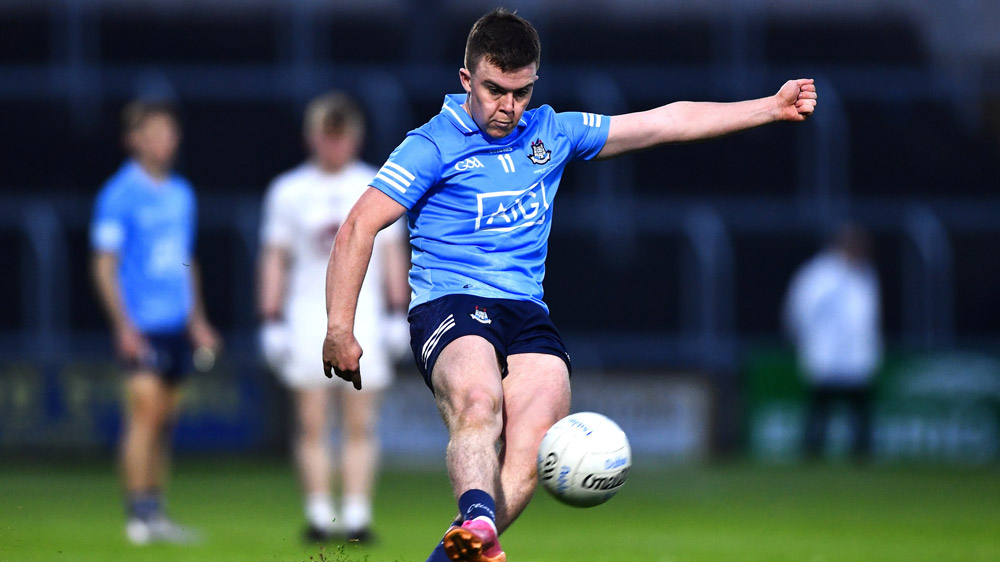 Fionn Murray of Dublin and Thomas Davis kicks a free during the EirGrid Leinster GAA Football U20 Championship Final match between Dublin and Kildare at MW Hire O'Moore Park in Portlaoise, Laois. Photo by Ben McShane/Sportsfile

Dublin stopped short by Kildare in Leinster Under 20 showpiece

DESPITE a strong contribution from a number of local players, Dublin suffered to an agonising 0-17 to 0-15 defeat at the hands of Kildare in the Leinster Under 20 Football Championship decider at O’Moore Park in Portlaoise last night.

Having previously secured this title in back-to-back fashion during the 2019 and 2020 seasons, the Sky Blues were hoping to reclaim the provincial crown after relinquishing it to eventual All-Ireland winners Offaly in 2021.

Fionn Murray (Thomas Davis) and Luke Breathnach (Ballinteer St John’s) led their charge superbly with five points apiece, but Kildare had that bit extra in the tank to see off the challenge of their neighbours.

There were no fewer than four Ballinteer men named amongst the substitutes in the shape of Liam Smith, Ben Millist, Jack Lundy and Ronan Cullen. Completing the local interest was Templeogue Synge Street’s Max Fitzgerald, who was offering back-up to O’Sullivan as replacement netminder.

While O’Dwyer (free) and Breathnach were both on target in the early exchanges, Dublin found themselves 0-6 to 0-2 adrift at the midway stage in the opening half.

O’Dwyer and Murray added to their side’s tally with two points apiece before the dynamic Breathnach restored parity for the Blues (at 0-8 apiece) in time for the interval.

Murray twice cancelled out slender Kildare leads in the third-quarter, but the Lilywhites were relentless in their pursuit of scores.

Cullen and Millist were both introduced off the bench as the second period progressed, either side of their clubmate Breathnach kicking a well-worked equaliser.

Although Kildare stretched three clear with 10 minutes remaining, Dublin looked set for a grandstand finale when Murray and Breathnach fired over unanswered scores.

Yet Kildare held their nerve and a stoppage-time point by James Dalton edged them over the line in the end.

NEWER POSTCoin commemorating 40th anniversary of fire station raises €1,700 for HOPE
OLDER POST‘Going back to education has given me a bug for learning’