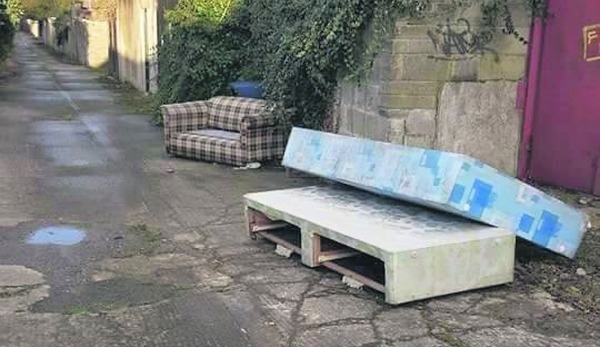 LANEWAYS in Palmerstown have been hit by another dose of heavy-duty dumping this week – this time number of couches and mattresses were found in the Kennelsfort/Coppice lane.

Dumping has become an ongoing issue in Palmerstown, especially with laneways nestled in between roads and houses across the community.

In December, The Echo reported how the dumping of tiles at a Palmerstown laneway behind the Oval led one councillor to take decisive action.

Independent councillor Paul Gogarty decided to remove the offending material as it was blocking the lane, and it would take the council “several days” – putting his back out in the process.

Cllr Gogarty blasted the person who dumps this sort of stuff as a “scumbag”, whilst other residents blasted the amount of rubbish and glass in the laneway as “unreal.”

Gogarty, who previously packed boxes of tiles into his car and brought it to Ballymount Civic Amenity centre, is appealing for anyone with information to report the incident to Dublin City Council or gardaí.