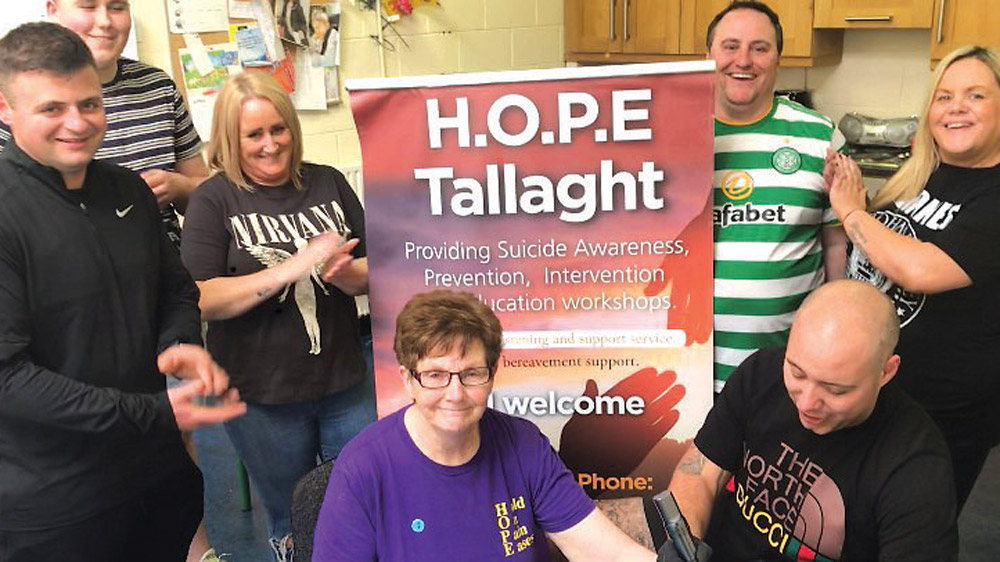 THE community came together in support on Good Friday, raising €5,500 for a Tallaght-based suicide prevention drop-in centre.

Now in its tenth year, the community-led tattoo day in St Aongus Community Centre has been raising funds for HOPE in Tallaght for the past five years.

Speaking with The Echo this week, founder of HOPE Mary McLoughlin thanked the community for its continued support and for dropping into the community centre on the day.

This year, Mary was among the people to get a tattoo, with the Tallaght mam’s tattoo in honour of her sister Kathleen.

Confirming that €5,500 was donated to HOPE following the event, Mary said: “The money raised will go towards our rent, training courses for our volunteers and suicide intervention training for [members of] the community.

“The money raised is going towards saving lives.”

Mary highlighted the importance of the day, not just in terms of raising much needed funds but in raising awareness and providing a space for people to chat.

“The day was absolutely brilliant, there was such a fantastic atmosphere,” Mary said.

“So much effort was put into the day, it was so well organised.

“People were all there for the same reason and were able to sit down and have a chat, it was just really nice.”

Organised by the community, the event is led by Patrick Faye, Catherine Faye, Sharon Barrett, Conor Kelly, Carol Gaffney and Jennifer Faye, many of whom grew up in Castle Park.

“On the day people could sit around and talk… people were looking after each other.

“The day is also about raising awareness, people can drop in, have a cuppa and get a number for HOPE.”

Based in Tallaght Village, HOPE is, since Covid, contactable by phone, with the charity hoping to resume its drop-in service in the coming weeks.

Encouraging members of the community to get in touch, Mary said: “Anybody who is worried about themselves or anybody belonging to them, give us a call.

“If you’re somebody who has lost someone and doesn’t know who to talk to, call us.”