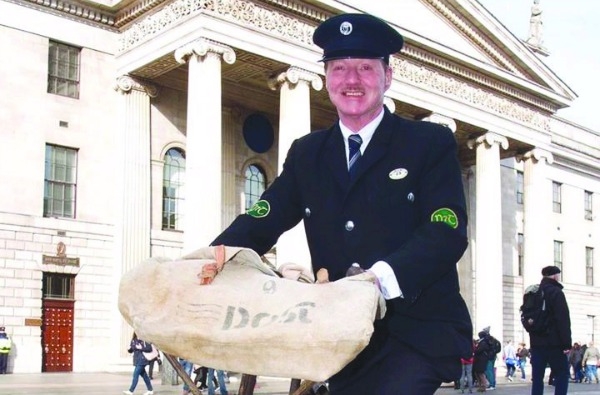 Eamonn, in classic P&T attire and a 1920s bike, reflects on the festival

LOCAL piper and postman Eamonn Walsh, from St Maelruan’s Park, was featured as part of RTÉ’s Reflecting the Rising event on Easter Monday.

Dressed in an old Post and Telegraphs uniform, Eamonn travelled around the St Stephen’s Green area with a classic postman’s bike, which dated back to the 1920s.

RTÉ’s Reflecting the Rising event on Easter Monday saw thousands of people descend on Dublin city centre for a family event to mark the centenary of 1916.

There were events held across the city, including St Stephen’s Green, Merrion Square, O’Connell Street and Fitzwilliam.

Speaking to The Echo, Eamonn said: “It was a fantastic day, absolutely brilliant to be a part of. It was a very positive day, a great day to be Irish.

“Despite the predictions of rain, it held off until after the festivities ended at 6pm. There was a lot of men, women and children reminiscing and sharing stories.

“A lot of families said that the day brought back memories, and there were some amazing stories coming through.

“At one point, it took me nearly two-and-a-half hours to get from the Shelbourne Hotel to St Stephen’s Green, only a few hundred metres, because people kept stopping me and asking for pictures in the outfit. Now I know what the President and the Taoiseach go through!

“It was great to be a part of RTÉ’s Reflection Day. The 1916 leaders would have been very proud of the commemorations.”

Some of the events included local involvement, including a series of short films with family members of the people involved in 1916 that were made by the students of Ballyfermot College and showcased at the Lighthouse Cinema in Smithfield.