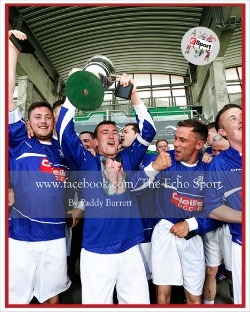 Bluebell United ended a 27-year wait to claim the LSL’s top prize when they were crowned champions without kicking a ball last Friday after Crumlin United were beaten by Drumcondra.

On Sunday they then travelled to the home of the outgoing champions in Pearse Park to lift the Charlie Beahan Cup, and we chatted to Bluebell United

On the same day, Collinstown clinched the Leinster Junior Cup when they toppled junior footballing giants, Sheriff YC in Tallaght Stadium, and manager Kevin Carroll spoke to us about the final and what it meant to the club and the community to win.

Community Games football winning side Kilnamanagh are another team who made the sports pages, along with Lucan United’s senior men who followed on from their LSL Senior1B promotion with victory in the Gilligan Cup Final.

If that wasn’t enough to whet your appetite, then the story of Tallaght native Cian Bolger bagging the winning penalty in the League Two play-off in Wembley last Saturday should do the job, and we have all the reaction from the former St Anne’s GAA man.

Added to this, the success of Drimnagh’s Andrew Doherty, who won the Irish Under 19 Snooker Championship over the weekend, features, plus all the action and reaction from what was a brilliant weekend for local clubs in the Dublin Under 16 Championship is covered extensively, with wins for Ballyboden, Templeogue Synge Street and St Jude’s.

All in all, you won’t find better coverage of local sport anywhere, so don’t forget to pick up your copy of the Echo Newspaper on sale this Thursday, or visit www.echo.ie to subscribe so you can read all the latest local news on your mobile, tablet, or PC.