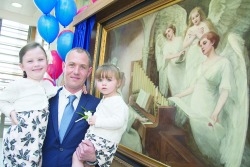 A TALLAGHT dad who was the youngest person in Irish history to receive a heart transplant celebrated 30 years of transplant innovation at the Mater Hospital – with his two daughters.

Patrick Berry (33) was 11 years of age when he was brought to the doctor with a suspected 24-hour bug.
However, after being admitted to hospital it was discovered that Patrick’s heart had doubled in size and he was diagnosed with Viral Cardiomyopathy – an inflammatory disease of the heart muscle.

After discovering that the only treatment to address Patrick’s condition was a transplant, the family were told that their son would not see Christmas and that his condition was too serious to fly to England.
However, on 18 December 1993 a donor was found for Patrick – who at this stage only weighed four stone.
Patrick was rushed to the Mater Hospital and operated on that same day, after which the brave 11-year-old made a full recovery – and is now the proud father of two little girls and an avid football and tennis player.
Patrick said: “I would like to thank all the surgeons and the staff at the Mater Hospital and of course the family of the donor.
“I am forever grateful to them.”
He added: “What I would like to get across from this is, I have two young children.
“When people visualise themselves donating their organs, they only see themselves saving one life, but it’s so much more.
“I was given that organ when I was 11 and if I hadn’t been given that heart my daughters would never have been born.
“So you’re not only saving one life, you’re helping create ones.”
Patrick and his daughters were invited to celebrate 30 years of transplant innovation at the Mater last week, during which three decades of heart transplants and ten years of lung transplants were commemorated.
The MMUH [Mater Misericordiae University Hospital] Heart Transplant Programme commenced in 1985 and has since become the National Centre for cardiac surgery and heart and lung transplantation in Ireland.
In May 2005, the first lunch transplant procedure ever undertaken in the state took place in the Mater, which was closely followed by the first double lung transplant in 2006.
During the commemoration, Patrick Berry and Kate Kavanagh (27), who received a double lung transplant in 2014, unveiled a painting dedicated to St Cecelia – the name of the cardiothoracic ward, where transplant patients recover post-surgery.
Speaking at the event, Minister for Health Leo Varadkar said: “The 330 heart transplants and 130 lung transplants performed in the Mater over the years are a credit to everyone who has worked on the hospital transplant programme.
“Ireland had the third highest rate of lung transplants in Europe in 2014 and I want to see Ireland’s rates on organ donation and transplantation matching the top performing countries in Europe.”
The Minister confirmed that additional funding of €3 million has been provided this year to the HSE’s Organ Donation and Transplant Office to develop the most appropriate infrastructure for organ donation and transplantation, which includes 19 extra staff.
Visit www.ika.ie for details on signing-up for a donor card.