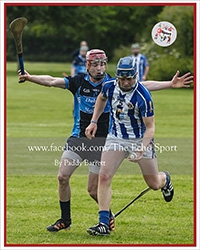 We thought the summer would bring something of a reduction in terms of the amount of sport happening in our local area, but as soon as one season finishes you can be sure another gets going, and the GAA calender is now well under way. In this week’s Echo Sport we have all the action from the thrilling Adult Hurling League Division One clash between St Jude’s and Ballyboden St Enda’s, and what a game it was! Some of Dublin’s best hurlers were on show, including Danny Sutcliffe (St Jude’s), Conal Keaney, David ‘Dotsy’ O’Callaghan, Shane Durkin and Paul Ryan (All Ballyboden).

Meanwhile, in the Intermediate Hurling Championship Thomas Davis welcomed Lucan Sarsfields to Kiltipper Road on Saturday evening, and we have all the action from what was a very entertaining game. Sean Reilly was the Man of the Match for the homeside, putting in a stellar performance, and others including Kevin Ward and Dave Foran also impressed.

Elsewhere, Irish Paralympic goalkeeper and Firhouse native Brian McGillivary speaks to Echo Sport ahead of the team’s qualification competition for the 2016 Paralympic Games in Rio. The Irish squad have travelled to St Georges Park in Staffordshire for the CP 7-a-side World Championships, and if they can secure a quarter-final place it may be enough to see them qualify for the Rio 2016 Paralympic Games next year. McGillivary is joined in the squad by Ballyfermot man Dillon Sheridan, and we would like to take this opportunity to wish the entire team the very best of luck.

In other soccer news, Booth Road Celtic took on Terenure FC in the Dublin Women’s Soccer League on Monday evening in Clondalkin Community Centre and we have a full report and pictures from a game that was filled with goals and some great frootball. Also in soccer news you’ll find all the action and pictures from Leicester Celtic’s mini World Cup competition which was held last weekend.

In other news we have all you need to know about local participation in the European Games in Baku, with Lucan’s Jenny Egan narrowly missing out on a medal in the K15000 canoe competition by less than a second overall. Meanwhile, Tallaght’s Mark Casserly was in action in China recently competing in the hugely popular World League Fighting competition, and the Muai-Thai boxer speaks to Echo Sport about his success in the K1 rules contest.

As Always, if there is something we’ve missed then get in touch and let us know, and make sure to keep an eye for our new GAA Kit Competition 2015 that launches in this week’s edition. Simply fill out the voucher in the Echo Newspaper, naming the local GAA club you would like to award your voucher to, and ether send it back to the club or to us here in the Echo.