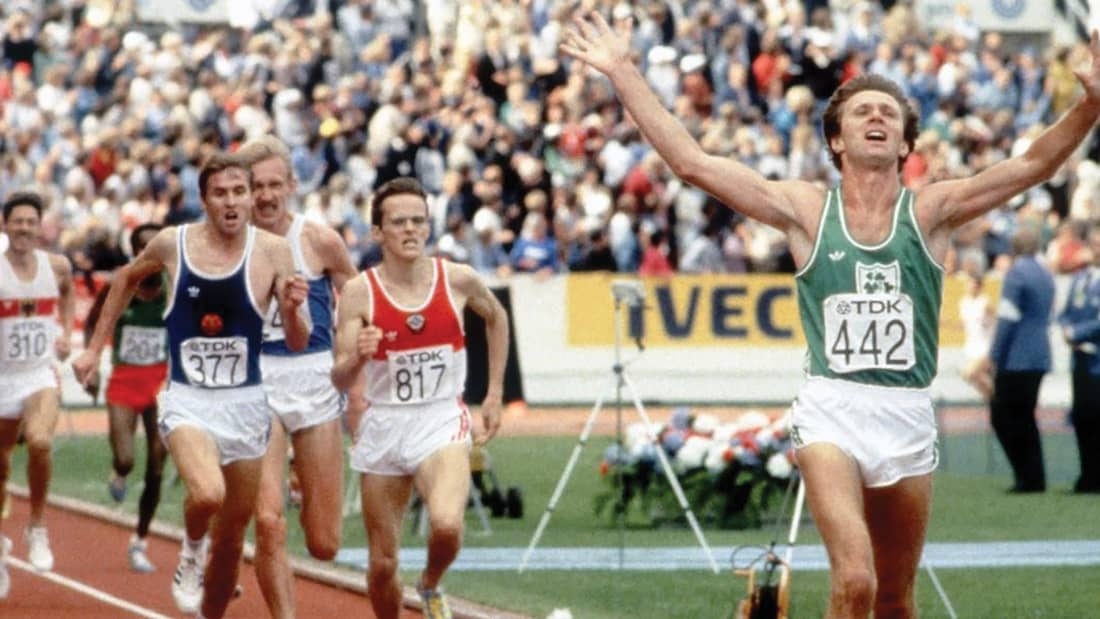 EAMONN Coghlan is unequivocal about the personal significance of his stunning 5000m gold medal win at the 1983 World Athletics Championship in Helsinki.

While unquestionably one of the greatest athletes to ever represent Ireland, the Drimnagh man, nevertheless, had to deal with the heartbreak of twice just missing out on the Olympic podium after finishing fourth in the 1500m in Montreal in 1976 and again in the 5000m in Moscow four years later.

Injury ruled him out of the 1984 Summer Games in Los Angeles and age undercut any hopes of him making a serious push for a medal when he finally returned to the Olympic stage in Seoul in 1988.

For Coghlan, the elusiveness of Olympic glory in an otherwise hugely decorated career, in itself, makes that World Championship gold of ‘83 all the more momentous.

“It was my moment of redemption, because when it came to both Olympics in 1976 and ’80, I wasn’t just running for a medal, I was running for gold,” he told The Echo.

“In the first one, I guess it was just naivety, where I screwed up my tactics and I blew it.

“1980, again I had a great year, but I over-trained and two weeks beforehand I was sick as a bloody dog and I didn’t run for a week, so it was great to even make it to the final, and obviously very disappointing to finish fourth again.”

Eamonn Coghlan was one of Ireland’s most consistent athletes

Yet the heartbreak of falling just short in two consecutive Games brought, with it, the experience that was to prove vital when it came to the pursuit of World Championship gold three years on as Coghlan explained.

“I was injured the previous year. I was out all of 1982 and I made sure I wasn’t going to over-train. I had learned from my previous mistake from Moscow and training went exceptionally well.

“When it came to the [1983] World Championship season, I had a great season, racing in America, racing in Europe. I don’t think I even lost.

“And all of a sudden, about two weeks before the World Championships I was feeling a little bit tired, so I decided I would just back off and let the mental and the physical freshness come back into my body.

“So when I got to Helsinki I did a track workout with Frank O’Mara and Marcus O’Sullivan and I knew right there and then, bang, I was back on top of it all again.

“I also had in mind that I wanted to prove to the world that I can bloody well do it on the world stage, so I just played it really cool in the heats and in the semi-final, just to qualify.

“In the race itself, again I decided I was not going to do anything stupid. I was going to coast around for eight laps from the middle to the latter part of the pack and just try and conserve as much mental energy as possible.

“So I just played it really cool and when I saw Thomas Wessinghage from West Germany, who I gathered as being my dangerman, not being able to move and catch up with Dmitriy Dmitriyev, I said ‘okay, now it’s time to go and haul this guy in.’

“I remember clinching my fists going by the Russian and then about 50 yards out I kind of put my hands out in disbelief. ‘God I can’t believe I’m going to win!’

“And when I crossed the finish line it was like one of the easiest races I ran as opposed to being one of the hardest.

“It all went according to plan. It was like everything I had mentally rehearsed and physically rehearsed in training, came to the fore that particular day. I had seen it so many times in my mind.

“Just the satisfaction of being able to do it on the world stage, which I knew I should have in ‘76 and in ‘80, this was just that moment of redemption. It was just one of the greatest feelings.

“None of that was expected and I really didn’t understand the joy that was expressed by the Irish people that day and the pride that they had. I think they felt as much pain for me in ‘76 and ‘80 and this was their moment too to say ‘I knew Coghlan could do it!’ It was great.”

For Coghlan, the line separating success and failure, was finer than most when it came to competition at the highest level.

The Dubliner, who set numerous world records, most notably in the indoor mile, was one of the most consistent performers on the athletics circuit, making his Olympic ordeal all the more difficult to stomach.

“I was feeling great heading into the 1976 Olympics. I won the heat in a fast time and I blew everybody away on the home-straight, the same with semi-final. So I had more or less shown my cards.

“Then the night before, my coach here Gerry Farnan said to me ‘so Eamonn what’s your plan for the final?’ And I said ‘I’m just going to sit behind [John] Walker all the way and kick’. He said ‘that’s all. I don’t need to say anymore.’

“So the morning of the final Jumbo Elliott, the great college coach in Villanova, rang me in the apartment we were staying in. And he said in his nervous stutter ‘okay champ, there’s a lot of fast half-milers in this race.’

“But when the gun went off I ran exactly as I planned with Gerry Farnan and that was to stay behind John Walker in about seventh or eighth place.

“When we got through the 400m in 62, which is like pedestrian pace for a 1500m, all of a sudden I thought of the pace and Jumbo and what he had said.

“And I’m looking around in anticipation of someone going past me, hoping they would, but they didn’t. They just sat and sat and sat. Here were the experienced guys on the world stage, an Olympic Final, one day in your life, four minutes to do it and they’re sitting there.

“So with 200 to go Van Damme tried to go by me and I held him off and then as we came around the turn he got by. And I’m running up on the outside of the second lane with Walker first and Van Damme second and I’m trying to go by them.

“I was like ‘God I’m not getting anywhere’. It’s like a dream. You’re running as fast as you can, but you’re still in the same spot.

“And in the inside, just as we approached the line, aww, [Paul-Heinz] Wellmann got me for the bronze medal.

“I went on to the infield of the track and I lay there devastated, absolutely devastated, because I was only used to winning races. I wasn’t used to finishing fourth.

“But I regrouped and just got stuck in. I went on the European season and I won all around Europe and I more or less just put that disappointment behind me.

“In the [1978] European Championships when I won silver, the plan was to beat [Steve] Ovett. He was definitely the overwhelming favourite.

“As it turned out, it was a very slow race and I got boxed in really bad.

“The next minute, Ovett shot past everybody and I still couldn’t get out and he was gone.

“And I just remember putting my arms up with joy to finish in second place, because I knew what it was like to be out of the medals.

“I don’t remember too much to be honest about the race itself. I had just broke the world record for the indoor mile that season and I went in with no fear because I knew I could beat Wessinghage, I knew I could beat [John] Robson from Scotland and whoever else was going to be in it.

“So I was quite comfortable in my own mind just to run a tactical race and I think with about 400m to go in the race I took the lead and didn’t let anyone come near me.

“Ahead of Moscow [Olympics] I got sick. It’s as simple as that.

“So what I tried to do in training was replicate what it was going to be like running three hard races within a period of four days.I just did mad stuff.

“At the end of the day I went to Oslo. I think I ran something like seven races in eight days. I was all over Europe running.

“I was living up in Kingswood Heights at the time and I remember lying in bed just really really ill. I didn’t think I was ever going to make it [to Moscow].

“But I went off to Moscow. I wasn’t a happy camper going there. I also had a stress fracture in my shin bone which I didn’t even have properly diagnosed and I was hobbling around the Olympic village there with this pain.

Coghlan never even got the opportunity to contest the 1984 Olympic Games, recalling “You break the World record for the indoor mile two more times, you win the Wanamaker Mile, you run your 3.49 miles and you win the World Championships and now, great, you’re the favourite with three weeks to go for the [1984] Olympic Games gold medal in the 5000m in Los Angeles, but I had been struggling.

“I had been out injured that winter of early January ‘84 with a stress fracture in my shin bone and I pulled out of the indoor season.

“I was struggling in the Cork City Sports with pain in my shins. I ran the National Championships with John Treacy hammering me in the 5000m and I just couldn’t withstand the pain anymore and I pulled out of the race, that was it, I was not going to Los Angeles.

“In Seoul [1988], I was getting to be an old man then. I was 35 years of age at that stage and I always remember Jumbo Elliott saying ‘there’s always one race in you’ and I was always hoping that would be the one race.

“But again I was dealing with all sorts of aches and pains because of old age and because of high mileage and I was struggling even to get the qualifying time.

“So I then went to Seoul with the pure purpose of seeing the career out. There was not a chance I was going to win.

“A lot of people would say to me over the years, ‘Eamonn how come you were better indoors than outdoors?’

“Well that wasn’t true, because I won every Grand Prix meet on the circuit in America and Europe. If I ran 30 races a year, I’d win 28 or 27, but when you f**k up in the Olympics, people don’t even remember that.