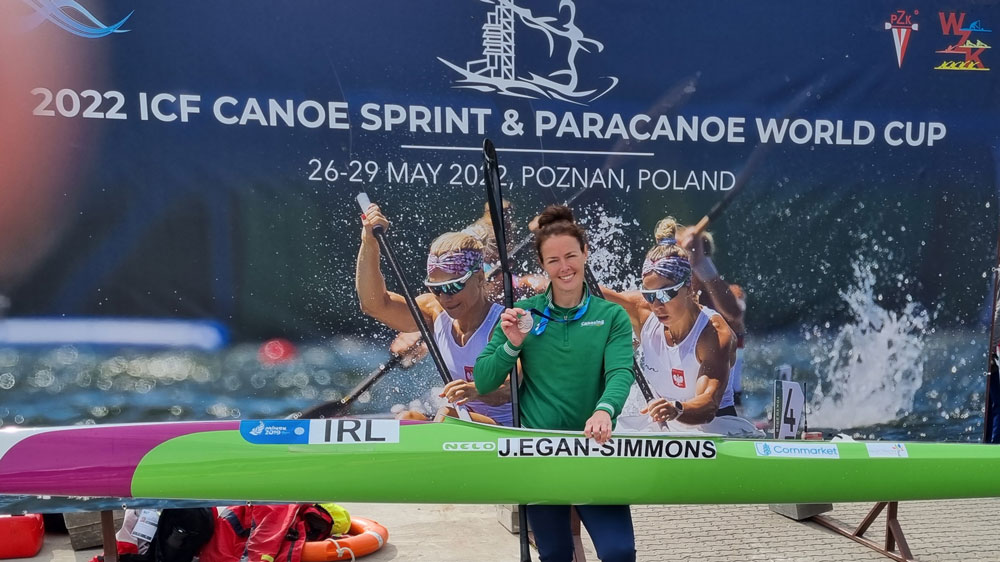 The Lucan kayaker who secured her very first World Cup podium place back in 2010 when she clinched silver in Szeged Hungary, took her tally to double figures yesterday when she came home less than a second behind runner-up Melina Andersson from Sweden and just over four seconds adrift of winner, Estefania Fernandez of Spain.

Having just missed out on a medal at World Cup One in the Czech Republic the week before, Egan was delighted with her performance in what was a new-look Women’s K1 5000m event.

“This World Cup introduced a new format for the K1 5000m,” the Dubliner told The Echo.

“It consisted of six laps – one long and five short laps with two portages – and athletes could choose when to do their portages on Lap Two and Six, so there was a whole new tactical element added to this already tactical race.

“I was talking to my coaches Pete [Egan] and Jon [Simmons] and we thought it was best, if possible, to do the portages as early as possible in the race.

“You didn’t want to risk maybe having to go off by yourself and not having people to work with either, so I ended up doing my portages on Lap Two and Three and it worked out very well.

“It was a special day for me, my family and my extended support team because it was actually my tenth Canoe Sprint World Cup medal for Ireland,” she added.

Supported by Canoeing Ireland, Sport Ireland, OFI and Salmon Leap Canoe Club, Egan will be hoping to build on that medal-winning performance as she gears up for the World Games in Alabama in early July.

“The Canoe Marathon is in the World Games for the first time, so that’s the next one for me,” she continued.

“It’ll be a hard competition and a very hot competition. The temperatures will be quite high out there from what I’ve heard,” she said.