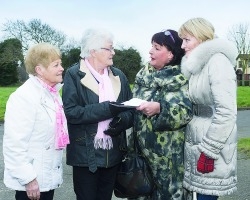 A 72-YEAR-old woman whose Clondalkin home was destroyed by fire told The Echo that herself and her husband are lucky to be alive after an electric heater went up in flames.

Margaret and Gordon Wignall were at home two weeks ago when the heater caught fire, gutting the back bedroom in their Clondalkin house and spreading within a matter of minutes.
The fire began just after 4.30pm when Gordon, who suffers with his health, was upstairs in bed. Although the flames took hold quickly both managed to escape through the front door.

Despite the tragedy Margaret has found huge comfort in the Clondalkin Active Retirement Group who took it upon themselves to raise funds for the 72-year-old this week.
Clare Morgan, chairperson of the group, arranged for more than 100 people to attend a charity function at The Laurel’s on Tuesday afternoon.

For more on this story see page 28 of this week’s Echo.