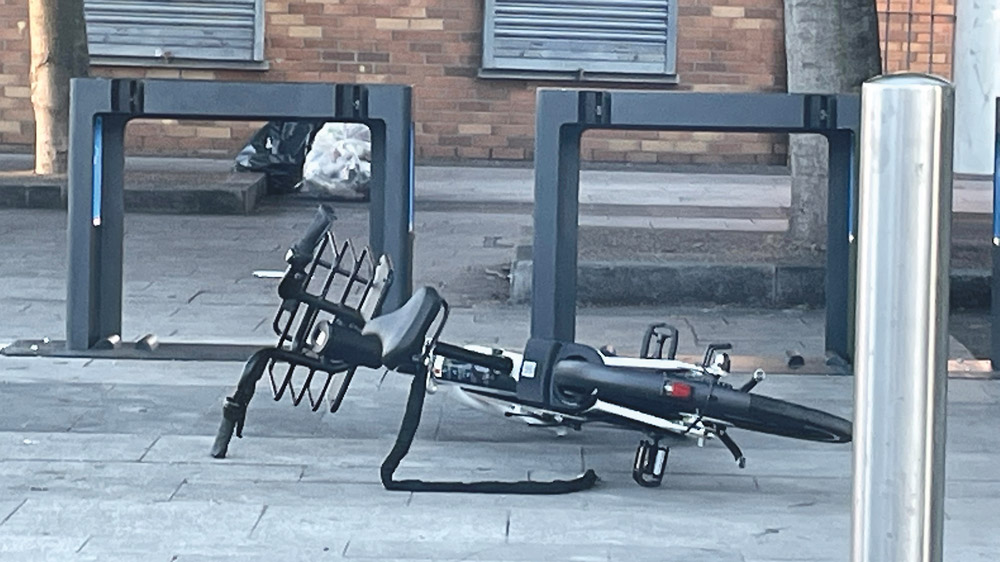 AN ELECTRIC bike hub, which was installed as part of a new pilot programme, has been destroyed within eight hours of its launch in a random act of vandalism.

The ESB recently engaged with South Dublin County Council through a proposal to provide e-bike hubs and parking facilities at four locations across the county.

On Thursday, June 27, the e-bike charging station was erected at the entrance to Westpark estate, off the Old Bawn Road in Tallaght Village.

Bicycles which are part of the e-bike hubs are fitted with security measures, such as alarms and smart locking, with the wheels locked until a user unlocks the bike through an app.

Within hours of the bikes being installed, they were pulled off the docking station, “destroyed” and stolen – with a county councillor recovering one of the bikes.

“For these new e-bikes to not even last eight hours after they were installed is incredibly disappointing,” Sinn Féin Cllr Cathal King tells The Echo.

“We are trying to develop these little plazas, in Tallaght village, at county hall, for people to come and go, put their bikes down, sit down and relax.

“These bikes are supposed to be vandalism-proof.

“The bike that I retrieved had the handlebars all bent on it, and they’re heavy-enough bikes as well. I was dragging it up the road because the wheels were locked on it, with the alarm going off.

“So that shows you the effort that these people went through to pull the bikes off the docking station and damage them.

“There is plenty for people to be doing other than random acts of violence like this.

“What we had was teenagers, both boys and girls, targeting and destroying these new bikes. These amenities are supposed to benefit everyone, so for this to happen is just so disappointing.”

Following the issuing of formal licensing in accordance with Section 254 in June to ESB Innovations ROI Ltd by the local authority, the Duckt Ebike Charging Stations were installed on public roads.

The bikes are powered by Bleeper, an app which enables users to hire bicycles through scanning a QR Code on the bike with a mobile phone.

Following the vandalism of the e-bike hub in Tallaght, a spokesperson for the council said “it was very disappointing to hear this morning of the vandalism at the Westpark location”.

As the council has no direct involvement with the provision of the stations, bikes or the operation of the facility, it was not in a position to issue a response in relation to the replacement of the bikes.

“These things work all over the city, and all over cities all over Europe,” Cllr King elaborates.

“Why can’t our own people here behave normally, and not do these random acts of vandalism – they were absolutely destroyed.

“I really hope the ESB stick with it and find a way that these bikes can’t be taken off the receptacle without using the app because they are a great amenity for the community.”

The ESB stated that it “is aware of an incident involving our eBikes pilot initiative”.

“The Gardai are currently investi-gating the matter and so it would be inappropriate to comment further at this time,” an ESB spokesperson said.

Gardai confirmed to The Echo that they were investigating the reported theft of a bicycle which occurred at 8.30pm on July 7 at Main Street in Tallaght in which “there was no damage reported”.

NEWER POSTSpeed Queen laundromat opens in Belgard – its 15th shop in Ireland
OLDER POST‘It hasn’t really hit me yet, it still feels like I’m in a dream’