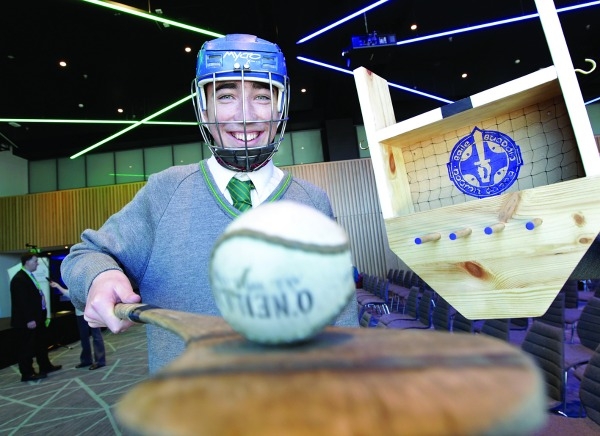 THREE local schools were on the ball at this year’s Student Enterprise Awards finals in Croke Park, promoting not only their innovative companies but their hometown of South Dublin County.

Teams from Coláiste Eanna, Coláiste De hÍde and Rockbrook Park School moved forward from the regional heats to represent their county at national level, and join more than 200 young entrepreneurs from 69 schools nationwide at the All-Ireland final last Thursday (April 20).

While there was no national winner among the three local schools, the Local Enterprise Office in South Dublin congratulated the teams on their achievements – and for reaching the finals out of a massive 22,000 students nationwide who participated in the entrepreneurial programme this year.

These students used the skills developed in woodwork class to design and build wall-mounted holders for hurleys.

Tech-minded group Find my Party represented the county in the Intermediate section and was made up of Rockbrook students Philip Omisore, Rishikesh Biju, Paul Costello and Hugh Harney, spotted a niche in the market and developed a website that showcases children’s party options in the area.

The Local Enterprise Office in South Dublin, which is based at County Hall in Tallaght, said: “We are delighted with the standard and quality of all of the groups and businesses that participated in the awards this year and we look forward to seeing what the students of South Dublin bring to the table next year.”