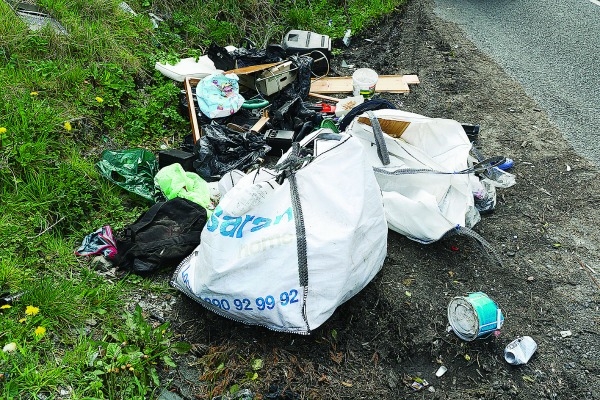 The level of illegal dumping on Killinarden Hill has seen the rural beauty spot make Echo headlines in the past, and this week the location was back on the agenda as four large skips lay on its grass verge.

One resident, who is one of a number of people who regularly litter-pick the area, told The Echo: “It’s absolutely disgusting – the level of dumping is unreal.

“I contacted the council nearly two weeks ago and only yesterday (Tuesday) did they come and remove some of the waste – some of it is still there.

“If rubbish is left there, more rubbish will be dumped – it’s like an advertisement for illegal dumpers.
“The council needs to start removing this waste quicker, I know the council is busy but they are not doing enough in relation to the removal of rubbish.

“They are too lax and getting rid of this rubbish and resourcing the removal of rubbish now will save money, time and the environment in the long run.”

He added: “I am part of a group that cleans Killinarden Hill regularly without any support from the council and it’s very frustrating that when we do need their support in removing large bags of rubbish, they don’t react – it’s hard to even get through to the right person

When contacted by The Echo, the council confirmed that it had received reports concerning Killinarden Hill and that arrangements had been made for the removal of waste.

Residents and members of the public are urged to support the council in taking appropriate enforcement action by making reports to the Litter Warden and by providing evidence, including testimony, where possible.”

When asked about the installation of CCTV, Ms Maguire responded: “The Council’s Litter Management Plan contains a commitment to explore the use of innovative and emerging technologies, including CCTV and Programmable Messaging Audio Devices, to tackle the problem of illegal dumping and fly tipping.

“In managing this service, the council is mindful of resources available, and requests for the installation of technologies are assessed on a case-by-case basis, having regard to certain criteria including site suitability and the repetitive nature of illegal dumping and fly-tipping.”