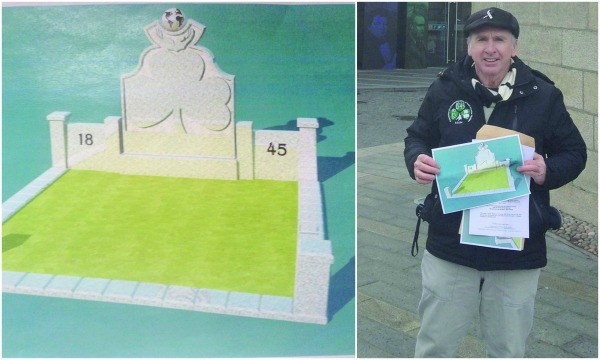 Family strive to get memorial to all the Irish Famine victims

A TALLAGHT family is the driving force behind a campaign for a memorial to the victims of An Gorta Mor in Glasnevin Cemetery, which is the biggest mass grave of Irish Famine victims.

Lobbied for by the Committee for the Commemoration of Irish Famine Victims (CCIFV), the memorial will represent all of the unmarked Famine graves in Glasnevin Cemetery, across Ireland and overseas.

Raheen resident Micheal Blanch, who founded CCIFV with his family, and was instrumental in the development of a National Famine Commemoration Day, told The Echo: “Dublin was the epicentre of the Famine people flocking to the city for work, food, emigration and, sadly, dying when they got here.

“That’s how Glasnevin Cemetery holds the most victims of An Gorta Mor in the world, and it’s important the victims are remembered with a fitting memorial – after more than 170 years of national amnesia.

“The memorial will symbolise all the victims of the Great Hunger who lie in unmarked grass on the island of Ireland, at the bottom of the sea in a watery grave and those overseas in unmarked graves – they will all be remembered in our national cemetery in Glasnevin.”

Speaking to The Echo, Micheal expressed his frustration over the delay in getting approval for the memorial, which he has designed with the support of Tallaght business, Craft Monuments.

As part of the memorial, CCIFV has contacted county and city councils across the island of Ireland inviting them to donate a flagstone with the county’s name inscribed on it – with each local authority paying for their own flagstone.

CCIFV is also willing to pay for the memorial, so is not seeking funding.

“It is hard to defend the biggest mass graves of Famine victims in the world and no memorial to them, what sort of society are we to allow this to go on.

“The computer image of the memorial has been shown to many independent people and they have all said it is a fitting memorial, let the people decide.”

A spokesman for Glasnevin Trust told The Echo: “Glasnevin Trust has had correspondence with Michael Blanch in which it has expressed its view that any famine memorial placed in Glasnevin Cemetery must be at the behest of the Irish Government and has advised that any application for such a memorial should have the full approval of the relevant government department together with agreed funding for the monument and its future upkeep.”

The Echo contacted the Department of Arts, Heritage and the Gaeltacht but a comment was not received in time for print.