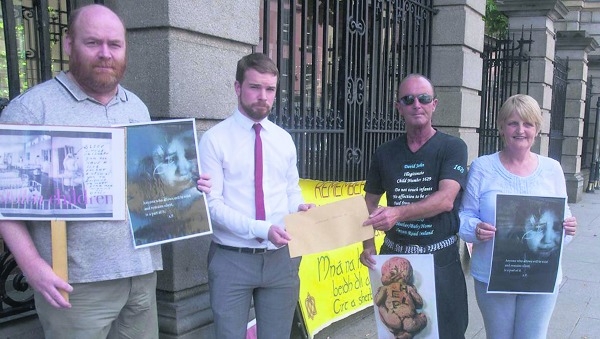 THE Coalition of Mother and Baby home Survivors (CMABS) lodged a formal complaint outside the commission of inquiry office on Baggot Street this week.

The group are demanding full inclusion of survivors and “fast-track redress for an elderly and dying community”.

Paul Redmond, Chairperson of CMABS said: “It is a national disgrace that such discrimination still exists in the centenary year of the 1916. We as a community are dying and torn in two but it seems that’s what the government wants.”

Clondalkin resident David Kinsella, who was born in Saint Patrick’s Mother and Baby Home said time is of the essence.

Mr Kinsella said: “Survivors expect the truth. We call on the government to have appropriate Dáil members and TDs available in mid-August to examine the interim report and facilitate for Mother and Baby home survivors to be in the public gallery.

“Waiting until September when the Dáil resumes falls short on time and the recent deaths of a lot of survivors. Our time is in the moment, not weeks, months or years.”

Cllr Timmons said: ‘’My mother Mary Timmons would have loved a State apology that told her she did nothing wrong. She died two years ago, having not received any type of justice. She and others deserve to have their stories heard, and the State apologise for the neglect and treatment.”