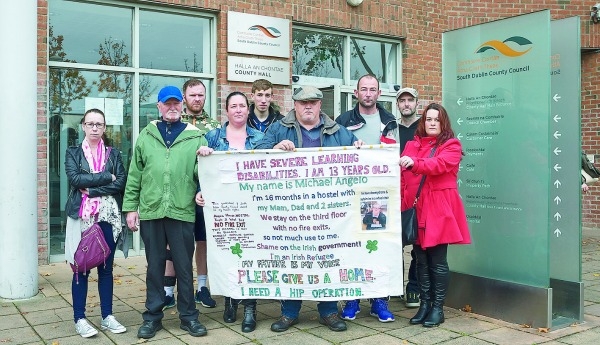 A FATHER took his family’s fight for a home to the doors of South Dublin County Council on Wednesday, in an attempt to get suitable and safe accommodation for his Down’s syndrome son.

Chris Moran has been living in emergency accommodation for the past 16 months with his wife, two daughters and son Michael, who, dependent on a wheelchair, has Down’s syndrome and autism.

The family, from Clondalkin, has claimed that the city-centre hostel they are living in is not suitable for Michael – as they are located on the third floor, with no fire exits.

Chris said: “If we need to vacate the building in an emergency we have been told to go down the stairs to exit the building.

“This is not an option for us with Michael – my teenage son is over ten stone and in an emergency he would have to be lifted into a wheelchair and then carried down the stairs – there’s no hope of us getting out of that building in a hurry. This accommodation is not suitable for my family and is not safe.”

He added: “I have been protesting outside Leinster House as well and calling up to the council every day but to no avail.

“I find it hard to understand that nobody can help me, considering my family is at a huge risk in the event of a fire. I’m also currently living in my car due to issues with the hostel, so my family is separated.”

Chris, who suffers from sleep apnea, was supported at his protest outside County Hall by members of Tallaght Says No and Dublin South West AAA TD, Paul Murphy.

Deputy Murphy told The Echo: “Christy’s case is yet another horrifying example of the human impact of the housing crisis.

“Faced with living in his car for an extended period, he had no choice but to protest to bring pressure to bear to get emergency accommodation.

“Thankfully, he received emergency accommodation for himself and it seems there may be a housing offer which would be suitable for his family’s needs.

“The fundamental problem lies not with the council, but the government. The answer to the housing crisis lies with transforming NAMA from a life-support machine for developers into a democratic utility to build social and affordable homes.

“We need to develop a protest movement like the anti-water charges movement to bring pressure to bear on the government to deal urgently with the crisis.”

Tallaght Sinn Féin councillor Louise Dunne came across the protest while entering County Hall and told The Echo: “What this family is going through is terrible and I have listened to their concerns about safety.

“However, due to the housing crisis, it’s proving hard for the council to find ground floor, adapted accommodation – with the current hostel being chosen because there are lifts.

“After speaking with Chris at the protest I liaised with some council workers who found ground-floor accommodation in Tallaght and they offered it to him that day.”

She added: “The council is under extreme pressure in relation to housing people and the recent Budget shows that the Government’s priority is not homelessness.

“It’s great that there are people out there who want to support vulnerable people and highlight their situation through protests, but the council is doing its best with what resources it has and the Mahon family is a priority.”

When contacted by The Echo, the council said: “This case is a complex one going on for some time and is being dealt with as expeditiously as possible by the council.

Chris and his family are going to view a property with council staff in the coming days.