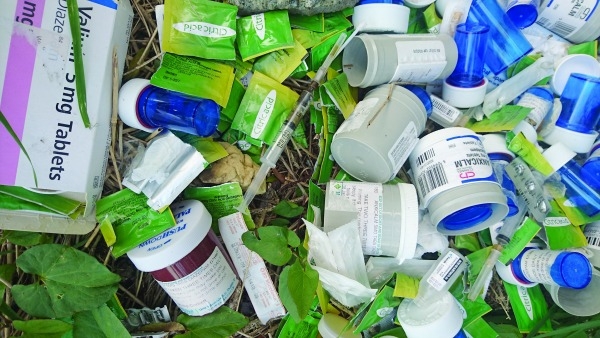 Fear for children as used syringes found on green

THE dangers posed by illegal dumping were this week highlighted when a stash of used syringes and empty prescription containers were found dumped on a busy public greenspace in Kilnamanagh.

Last Saturday, April 23, a group of young people came across a large number of discarded, empty prescription containers and used syringes in a greenspace that lies close to local primary schools and in the vicinity of the area’s soccer and GAA pitches.

One local father told The Echo: “My daughter came across it while she was walking through the field with friends and let me know.

“When I went down, I spotted that all of the prescription bottles were empty, but that there were used syringes among the waste.

“We have had problems with people dumping household waste in this area before but this type of waste raises much more serious concerns – if a needle jabs a person the consequences could be devastating.”

While the dumped waste could be a serious case of illegal dumping, the number of prescription drug bottles found have raised concerns among some locals that these drugs are being sold in the area, with containers for Valium and Diazepam, a muscle relaxant, among the items found.

He added: “The number of prescription bottles have raised concerns around drug-dealing.

“You don’t really see anybody hanging around in this green space during the day but at night, it’s pitch black, there’s no lighting, and I wouldn’t walk down there myself.

“If there is an issue of drug use in the area or people are selling, then gardaí need to start driving down the field and keeping an eye out, we need to prevent this from happening again.”

After residents contacted the local Garda station, officers attended the scene and removed the items.

When contacted by The Echo, a senior Garda source said: “As no actual drugs were found, we can’t go after a prosecution – it could be a matter for the Litter Warden.

“However, information on the items found will be passed on to the drugs unit and used as intelligence rather than evidence.

“That intelligence can lead us into doing an operation or focusing on a particular area.”

The source added: “Operations are carried out between Gardaí at Tallaght, Revenue and the Health Products Regulatory Authority (HPRA) from time to time to investigate the sale and supply of prescription drugs.”

Gardaí could not confirm if the items found have been traced back to a person or pharmacy.

The incident has also been reported to South Dublin County Council’s Litter Warden for investigation.