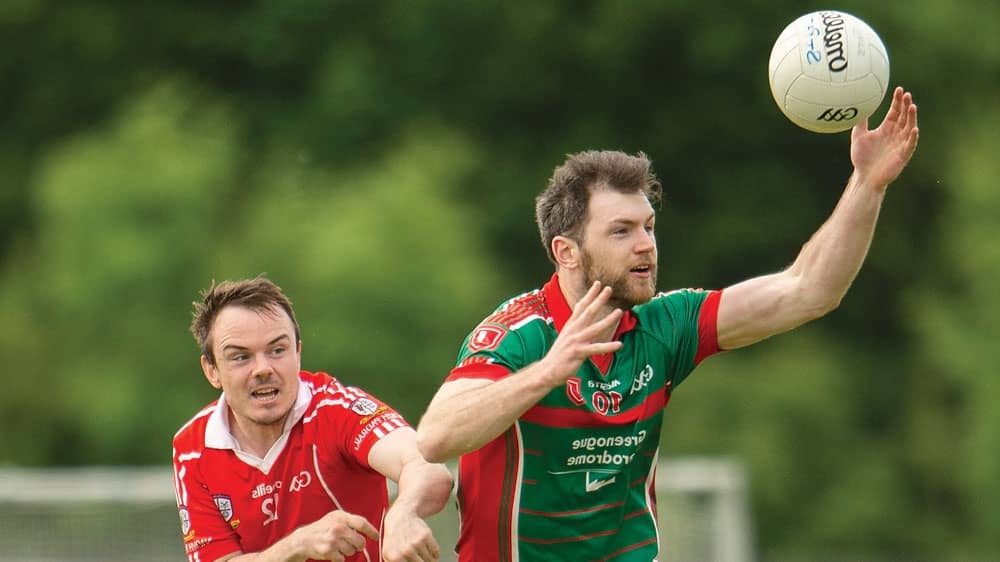 TURNING over kick-outs as the game entered the closing stages proved vital for St Finian’s as they rallied to claim a 1-13 to 2-8 victory over St Patrick’s in Adult Football League Division Three South.

In what was an enthralling encounter in Newcastle on Saturday evening, Finian’s pair Ronan Higgins and Conor Spillane helped edge the tie for the hosts as they latched on to opposition kick-outs late on.

Conor McCarthy of St. Finians in action against Des Rushe, of St. Patrick's, during the Division 3 match. Photo: Barry Cregg.

Up until that point, St Pat’s appeared to be heading towards an opening round win off the back of two Donal Murray goals in the first half.

After initially falling behind, the Palmerstown side saw their midfield maestro Murray make searing runs through the heart of Finian’s defence to position himself perfectly to take in killer deliveries.

The best of these came when full forwards Brian Gilbert and Graham Kelly played the ball quickly through the hands with the onrushing Murray eventually claiming possession, rounding the keeper and slotting home.

After Murray doubled his tally and young corner forward Adam Devitt clipped the ball over the bar in style, the home side pegged a goal back.

Centre forward Cormac McCarthy, who is also co-captain, reduced the deficit to just a single point at the break, as Finian’s trailed 1-5 to 2-3.

The travelling Palmerstown side were resolute in their defence with minor player Adam Lambe a highlight at centre back.

Playing far beyond his years, Lambe offered a great level of composure on the ball and proved to be a dominant force in the air.

The combination of Gilbert and Kelly was a real outlet in the full forward line, as they each served up a brace of points to keep their side in front in the second half.

However, the best score of the evening came in a training move finished off by Ian Boran, the club’s chairperson, who was operating at corner forward and returned a salvo of 0-4 from play.

Chasing the game, Finian’s pressed the Pat’s kickout with defenders Higgins and Spillane getting through a tremendous amount of work to turn over possession and zip a quick ball through the lines.

Flying out from the corner, Boran, holding off three defenders got the ball into his hands, turned onto his right foot and kicked a quick shot over the bar to close out the win.

Next up in this group, St Mary’s meet St Finian’s while St Patrick’s will host Good Counsel Liffey Gaels, all on June 26.