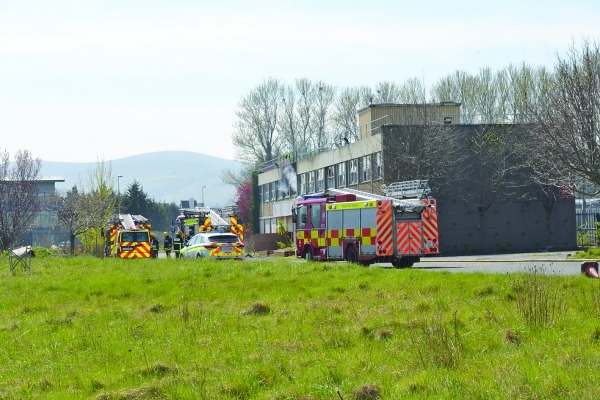 THERE HAVE been two fires at the former Gallaher’s site at the junction of Airton Road and Greenhills Road within the past week.

This week, on Wednesday, April 20, at 12.40pm three units of Dublin Fire Brigade and a district officer arrived at the site to tend to a fire. A spokesperson for Dublin Fire Brigade told The Echo that the operation was wound up within an hour with the fire extinguished. The tenders left the scene at 1.40pm.

Last Wednesday (April 13) the emergency services received calls just after 7pm about a fire at the premises. Five units from the Dublin Fire Brigade along with a foam tender attended the scene along with two district officers and the environmental unit of the DFB. Members of the ambulance service and the gardaí were also at the scene.

It should be properly secured to prevent people from going in there. The last thing we need is someone dying there. There could be a huge tragedy. I would be concerned that homeless people could be living in the site and could come into danger.”

Cllr O’Connor called for the site to be redeveloped.

He said: “It has the potential for something positive to be done there due to its proximity to IT Tallaght. Tallaght really needs good sites where good jobs could be provided and we have a site lying there”.

As previously reported in The Echo, the agents for the property, Turley Property Advisors, had locked down the site late last year because it was being used by many of Tallaght’s homeless. Last year the site was sold as a “long-term government income investment opportunity” for around €11,500,000 as two lots.

The site has also been used as a holding compound for the Amazon building site.