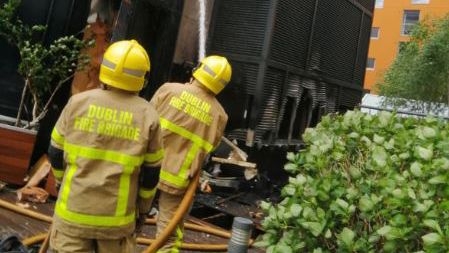 DUBLIN Fire Brigade has brought a blaze under control at an apartment complex at Tallaght Cross at lunch time today.

Smoke from the fire at the building in Tallaght

At approximately 12.30pm, units from Tallaght, Dolphins Barn and Nutgrove rushed to the scene as smoke could be seen coming from the apartment complex which is also home to The National Ambulance Control Centre.

The fire turned out to be wooden decking in an outdoor area  between the Rivers Building and Tallaght Cross apartments.

Buildings around the area where evacuated and the Luas was stopped as the Fire Brigade dealt with the fire.

The Luas is now running as normal.

DFB at the scene

The Echo understands The National Ambulance Control Room was evacuated and a temporary room was set up in Tallaght University Hospital.

There was no reports of injuries.