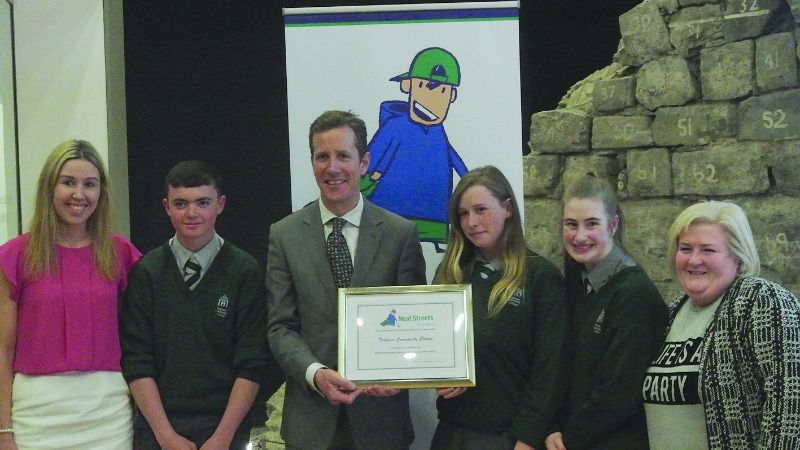 STUDENTS at Firhouse Community College became one of 28 schools to be awarded a national environmental certification for their recent efforts in cleaning up their school and community.

The Neat Streets programme is an initiative of An Taisce that helps secondary schools with litter and waste projects.

Over the past year, a representative for Neat Streets, Gary Tyrrell from Springfield, has been working with Firhouse Community College in their quest for certification.

Mr Tyrrell, who is well known across the area for his environmental work, told The Echo that as part of the Neat Streets programme schools create a committee which “forms action plans to get the whole school involved”.

He said that over recent months the Firhouse Community School committee has been “very proactive”, devising lots of great activities such as poster designing, which helped raise awareness of the programme.

The school’s first clean-up day was May 7 and saw more than 300 students and teachers clean the school grounds, local residential estates and shopping centres.

According to Mr Tyrrell “it’s really important to help clean up the area, but [Neat Streets] helps to change behaviours, too”.

The students of Firhouse Community College are also applying to South Dublin County Council for additional bins in their locality to prevent littering.

The school is also aiming for its Green Flag, a prestigious award given to schools who complete the Green Schools programme within An Taisce.

The work Firhouse students put into their Neat Streets certification can go toward their Green Flag, which generally takes about two years to achieve, according to Mr Tyrrell.

The students were led by their teacher, Ms Marie Kennedy, who brought them to Thornton’s Recycling Plant to learn about the recycling process.

Firhouse Community College received their Neat Streets certification award on May 10 for their efforts in cleaning up their area and promoting environmental awareness.

Any secondary school interested in the Neat Streets programme can go to www.neatstreets.org