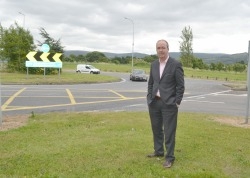 Road with the N81 (Tallaght bypass) at Glenview roundabout is set to be included as part of the draft County Development Plan 2016-2022, which is set to go to public consultation on Monday.
Fianna Fáil councillor John Lahart has called upon residents of the area to submit their observations about the proposed road, which is intended to alleviate traffic problems on the Old Bawn bridge.
The plan, which was proposed by county planners, would be a medium- to long-term plan if it is included in the final development plan, and will provide an alternative route from Firhouse to Tallaght.
Speaking to The Echo, councillor Lahart said: “The proposal would be in the medium- to long-term, and it is also proposed that it could serve the Tallaght Swiftway route that will provide rapid transport between Rathfarnham and Tallaght.

“The final vote comes down to the councillors, and an informed public opinion is vital for the final decision.
“I believe that the people can influence the outcome of the development plan, and I have already had both pro and contra views from residents.
“I expect there will be a good level of submissions on this particular development, and they will all have to be taken into account.
“I would be very much of the view that the decision on this would be formed of public opinion, and balancing that opinion.
“I am a great believer in the development plan, and it is vital that local people make their submissions outlining their views when the draft plan is published next week.”
The draft County Development Plan 2016-2022 will be launched this Monday and will go to public consultation for 8 weeks.