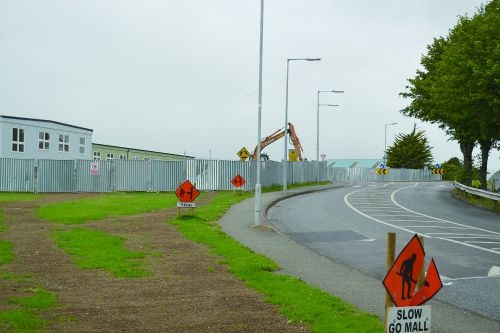 WORKS have been carried out by South Dublin County Council engineers to repair a connection manhole in Firhouse – whilst “minor damage” has been detected on a downstream pipe.

The findings represent validation for members of the community, who opposed contractor attempts to connect plumbing from the existing network, to new schools, until issues were resolved.

Residents cite long-standing problems with leaks and excrement flooding green space at Carriglea View.
The construction of temporary pre-fabs for Firhouse Educate Together and Gaelscoil Giuise close to Carriglea estate, brought issues to a head during the summer.

At the end of July, residents formed a human chain to prevent council contractors tapping into the existing sewage system. Public pres-sure led to intervention by Fine Gael councillor Ann Marie Dermody, who last week recommended the council carry out a CCTV survey.

Gabrielle McGee, Senior Executive Engineer, Drainage Maintenance, South Dublin County Council said:
“We have carried out a CCTV survey on the pipeline and as a result repairs have be done to the connection manhole.
“Minor damage was also detected to a downstream pipe and this will be repaired early next week.”

Councillor Dermody said: “I wouldn’t call it minor – excrement flooding public paths is a serious issue. Residents pointed to the number of callouts over a period of years. The council’s record only showed some callouts, and described the sewer as having ‘more than adequate capacity at this point.”

“In an effort to resolve the issue, the council attended on site and, using high-tech equipment, agreed that residents were correct. SDCC has agreed to replace the broken pipe and to do other remedial sewage works.”

Cllr Dermody was “encouraged” that residents “weren’t afraid to challenge the council’s record of events and were proven right.”

“The sewer was inadequate and would have resulted in there being a serious public health issue, had residents not stopped the contractor tapping into the system,” caid Cllr Dermody.

Firhouse Educate Together and Gaelscoil na Giuise will start in local community centres until September 4, when they are expected to move into the new pre-fabs.