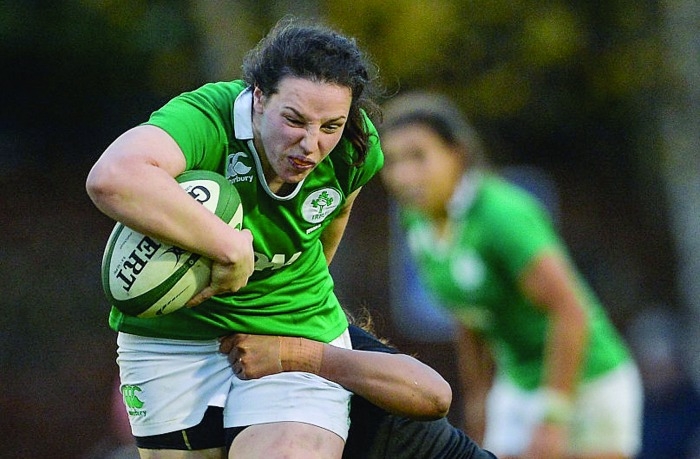 Fitzpatrick: “We didn’t perform to our standards at all”

WHILE not exactly surprised by the big Scottish performance they faced in their Women’s Six Nations opener in Broad-wood Stadium on Friday night, Ireland stand-in captain Paula Fitzpatrick from Tallaght insists a much improved display is needed if they are to beat Italy this Sunday and make a real push for the Championship.

It was only a late Jenny Murphy try that propelled them to a 22-15 bonus point victory over their hosts who have been waiting some seven seasons for a win in this competition.

Indeed they could well have won it had they been more clinical with their kicking, with Sarah Law and Helen Nelson sending a couple of efforts wide of the mark.

The homeside was 15-10 up at the break, Jade Konkel twice breaking over the whitewash while Law tagged on one conversion and a penalty.

Ireland, who had remained in touch with first half touchdowns from Sene Naoupu and Alison Miller, drew level when Lindsay Peat applied the finishing touch to a rolling maul before Murphy also made ti over in added time to ensure victory.

Speaking to The Echo, Ireland skipper Fitzpatrick said “I think the Scots put in a big performance for sure”.

“They have been building over the last number of years and that’s starting to come through.

“I really think they’re going to challenge other teams this year. Having said that we didn’t perform to our own standards at all.
“It mostly came down to handling errors and indiscipline. We gave away too many penalties at the breakdown. That allowed Scotland to kick in behind us and get their pack moving forward.

“We were on the back foot trying to generate momentum then and poor turnovers really cost us.

“We will take heart from the character shown in the last couple of minutes to come back, but it will need to be a much better performance next week.

“We will be looking to bounce back from the Scottish performance and put a lot of things right this weekend” she stressed.
Looking ahead to Sunday’s clash with Italy, Fitzpatrick knows they will have to be a lot better to dig out a win here despite the Azzurri losing out 8-20 against Wales on Saturday.

“We’re expecting another tough test against the Italians away from home” said the Irish Number 8.

“They have some very talented players particu-larly their scrumhalf.

“We will need to reduce our errors and improve our discipline around the breakdown, react to everything and be clinical with our set piece and phase play” she added.