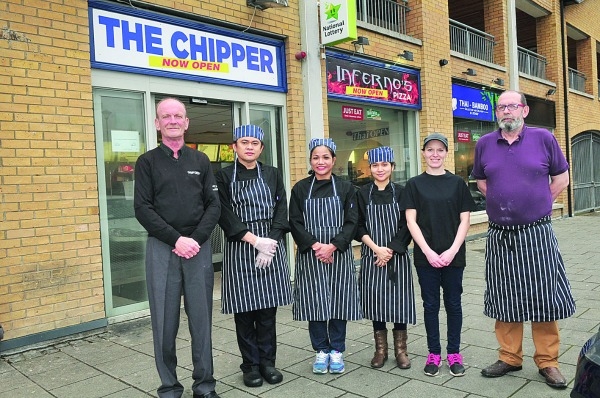 Five new jobs created at the mini-food court in Marlfield

THE couple behind the successful Tea Rooms in Firhouse has embarked on another venture and opened a mini-takeaway food court in Marlfield – which uses locally sourced produce, all prepared fresh on site.

Antoinette Kelly and Micheal McNally are the husband and wife team behind the warmly inviting Tea Rooms, which will continue to be run by Antoinette as Micheal focuses his attention on a new mini-food court in Marlfield Mall, Kiltipper.

The venture, which has seen the creation of five jobs, involves three separate takeaway options located in the one premises – a traditional chipper called The Chipper, an Italian stone-baked pizza joint called Inferno’s Pizza and an authentic Thai takeaway called Thai Bamboo.

Run individually, each takeaway counter uses fresh, locally sourced produce with the pizza dough and sauce made on site alongside all of the Thai dishes – which, prepared by a team of Thai cooks, are made to order from fresh ingredients.

Antoinette told The Echo: “Micheal saw what he believed to be an opportunity in Marlfield and he took a risk and opened a small mini-food court which will provide people with three different take-away options.

“He’s been working hard to get it up and running over the past three months, with the Thai takeaway opening last week.

“Micheal is using local suppliers and local produce where possible, with food produced on site from the freshest of ingredients.

“The traditional chipper fare, the stone baked pizza and the Thai food are all cooked in their own areas, with an open plan design allowing customers to see the food being prepared.”

She added: “In Firhouse the community has been part of the Tea Rooms success story, people have been wonderful and so supportive – and so happy to have a tea room in their community.

“We’re hoping to build the same relationship with Marlfield and its surrounding communities.

“We are striving to provide a selection of high-quality takeaway food that can be picked up or delivered, and we hope people living in the area drop in to see what’s on offer and to meet staff – which includes new manager, Dave Hickey.”

The new food venture, which will be officially launched in the coming weeks, is open Sunday to Thursday 4pm to 11pm, Friday 12.30pm to 12am and Saturday 2pm to 12am.