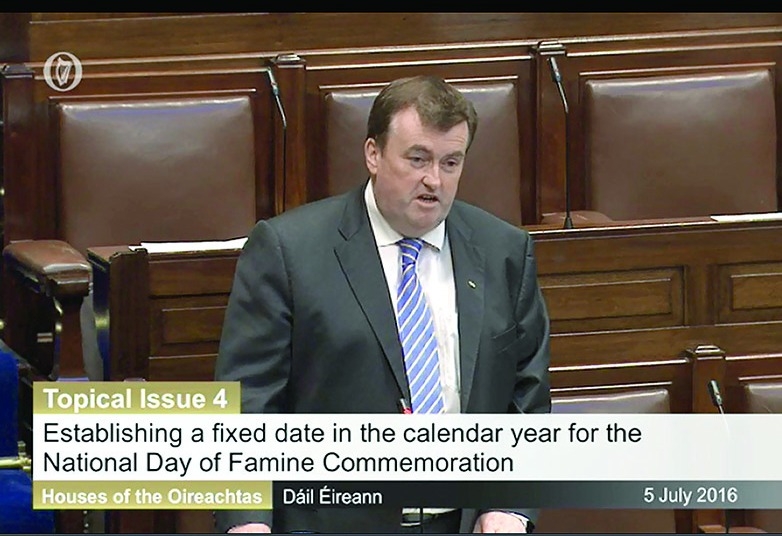 A TALLAGHT family’s campaign to secure a fixed date on the national calendar for the Famine Memorial Day received a boost last week, when the issue was raised in Dáil Éireann.

In 2004, Raheen resident Michael Blanch found the Committee of the Commemoration of Irish Famine Victims [CCIFV] – the group responsible for the introduction of a national day of remembrance in 2008 by then-Taoiseach, Brian Cowen.

Since a national day of remembrance was introduced, CCIFV has been lobbying the Government for a fixed date on the national calendar for An Gorta Mór Sunday.

However, a swinging date for the commemoration continues to be in place.

THE CCIFV has over the years garnered much support and collected hundreds of signatures in support of a fixed date, alongside engaging in a number of peaceful protests to highlight the issue.

Speaking in the Dáil, Deputy Brophy said: “The National Famine Memorial Day is one of three national commemoration days held in Ireland every year . . . the Famine commemoration event is the only one that does not have a fixed date in the calendar.

“However, when it comes to what is, perhaps, our country’s greatest tragedy, it is somehow deemed not important enough to be marked by a permanent date in our calendar. This is no longer acceptable.

“We need a fixed date for a number of reasons. It will allow everyone to work towards the commemoration, on a yearly basis, and allows schools to make it part of the school curriculum. A permanent date, to which people could plan ahead, would also allow more of the Irish diaspora to attend the commemoration each year, which would be very fitting considering the impact the Famine had on emigration.”

He added: “The Department of Arts, Heritage and the Gaeltacht maintains that the flexibility of the date is required to ensure the attendance of the President or the Taoiseach.

“However, I would argue that if someone knows that a date is in a diary, they can work towards it. It would not be accepted if we decided to hold our other two national commemoration days at different times each year.

“There needs to be a change in our mentality when it comes to commemorating this momentous and terrible moment in our history. I feel that setting a fixed and permanent date in our diaries to remember and honour all those lost their lives would be a very positive step.”

He said: “I am aware that a significant number of TDs are in favour of a fixed Sunday for the National Famine Memorial Day in the National Calendar.

It is time for the Minister to listen and respond in a more proactive way.

“I am calling on Minister Humphreys [Minister for Arts, Heritage, Regional, Rural and Gaeltacht Affairs] once again, to review her own ill-thought-out position and revisit the whole idea of holding the national commemoration on a fixed Sunday.

“I believe that a fixed date, around which awareness can be built and set in the public consciousness, would benefit and deliver immeasurable benefits for commemorating An Gorta Mór and educating younger generations about its importance and centrality in our collective story as developing nation.”

A comment from Minister Humphreys’ office was not received in time for print.