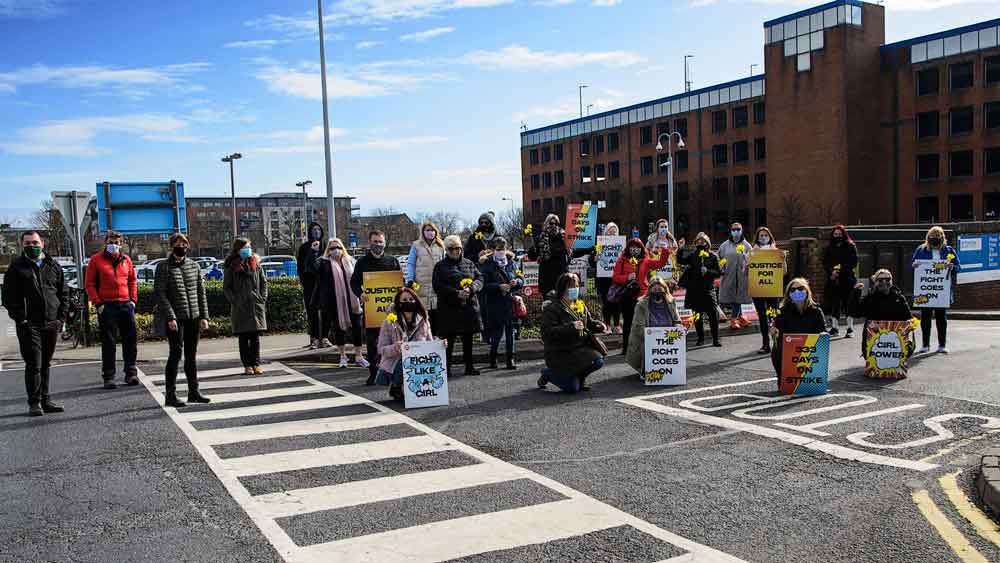 Former Debenhams staff on strike outside The Square last year

FORMER Tallaght Debenhams staff will be among those involved in a rally at the Dáil on Thursday to demand the passing of a Bill to protect retail workers.

If passed, legislation would make workers preferential creditors in a liquidation so they would be paid what they were owed as a priority.

It would also make unpaid collective agreements into a debt under liquidation law. Approximately 1,000 people at 11 Debenhams stores nationally, were unceremoniously let go on April 9, 2020, via a generic email.

It led to one of the longest strike actions in the history of the State, 406 days in total, with former staff spending over a year on picket lines, including one at The Square in Tallaght – seeking a fair redundancy package.

Carol Quinn, former shop steward in Debenhams Tallaght for 30 years, said the Bill, if passed, would prevent what happened to them “happening to other workers” and prioritise staff on the list of creditors should there be a liquidation.

She said Debenhams workers asked the Dáil a year ago to pass the Bill and the decision was paused for a year.

“Well, now that year is up. We ask anyone who can make it, to join us at the Dáil on Thursday May 12, at 12 noon to demand the Dáil now passes this Bill as a priority.

The mammoth strike action led to the launch of a book ‘Tales from the Debenhams Picket Line’, by Tallaght writer Fergus Dowd and Sue O’Connell.

It contained details of how staff mobilised with daily six hour shifts, including sleepovers to block trucks removing stock from the stores.