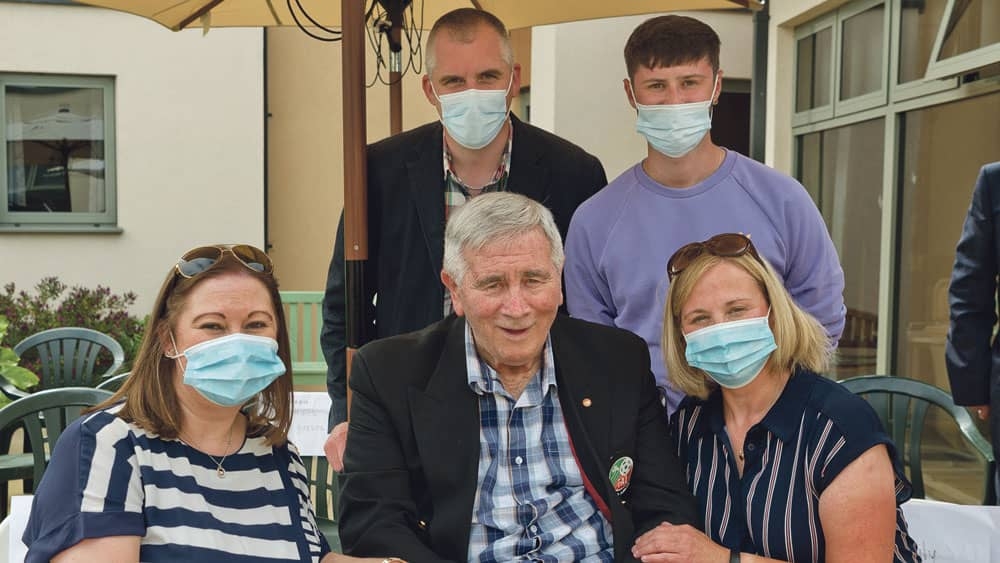 A FORMER international FAI and FIFA referee was presented with a plaque and award in recognition of his service and commitment to the sport at a local nursing home where he now resides.

Michael Caulfield, also known as Mick, was presented with plaques from representatives from the FAI to commend him on his service to the industry at Lisheen Nursing Home in Rathcoole on Monday, June 28.

The plaques commemorated memorable moments in Mick’s career such as the 1990 World Cup qualification match between Portugal and Luxembourg in 1988. He was also awarded a ‘Honourary Life Member’ award from the Irish Soccer Referees Society for his “outstanding contribution to refereeing in Ireland” and a plaque from the FAI for his service.

Mick first began playing football in his native Ringsend and then moved on to Crumlin where he played with Horse Shoe United in the Athletic Union League.

He started his refereeing career with the Leinster Junior League, and then moved to the Senior League. Mick then became a League of Ireland referee and worked with the senior panel.

He also went on to do the World Cup and European Qualifying games at International level and was appointed by FIFA to referee the only game that the USA played against Russia in a friendly International in the States.

Mick also worked in the Taoiseach’s Office and the Department of Finance throughout the years.

Mick is described by those closest to him as a “true gentleman” whether it be as a husband, a dad or a great civil servant, always courteous, helpful and willing to give great advice.

Mick’s achievements and commitment throughout the years was recognised in the presentation, with pictures displayed of him throughout his time refereeing and with staff from Lisheen Nursing home as well as representatives from the FAI speaking about his memorable career in sport.