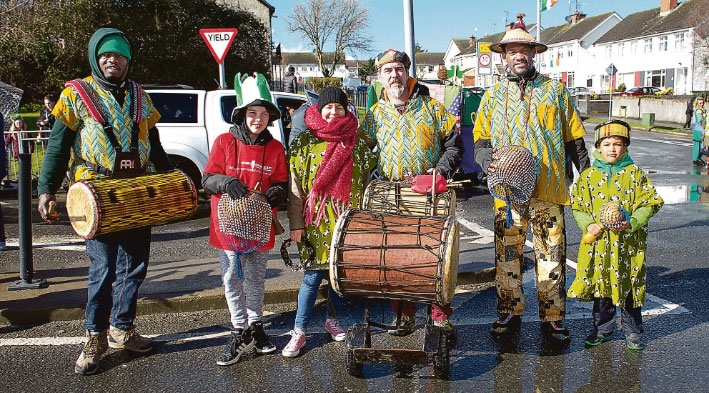 HUNDREDS of spectators gathered along the route of the Four Districts St Patrick’s Day Parade on Sunday, with one of the parade’s organisers calling it “absolutely brilliant” and praising the community for coming out in droves to support the event.

The popular parade was comprised of groups from the communities of Rathcoole, Saggart, Brittas and Newcastle, and it began at Rathlawns in Rathcoole and went through Saggart Village, with community garda Frank Howe, who has been missed by the Rathcoole community as he has been dealing with an illness for the last 14 months, taking on the role of Grand Marshal in the parade.

Sharon Redmond, one of the parade organisers, told The Echo: “The parade was absolutely brilliant. Crowds gathered early and there was a great buzz around the place.

“The length of Rathcoole was chock-a-block with people, and there must have been about 500 people in Saggart Village.

“We were thrilled with the turn out and the support we got from the community.”

Three awards were also handed out to three of the groups who participated in the parade, with Rathcoole Boys’ Football Club winning the best overall award, Billy Donoghue from Tippers Services Ltd and Fergal Mulligan from Midland Truck and Trailer Spares Ltd won the best business award, while Commercials Hurling Club won the best group/club award.

Ms Redmond added: “We worked so hard, and the sun came out and it was gorgeous – everyone said how great the parade was.”

The event organisers also want to extend their thanks to South Dublin County Council and Tower Credit Union for their financial support.