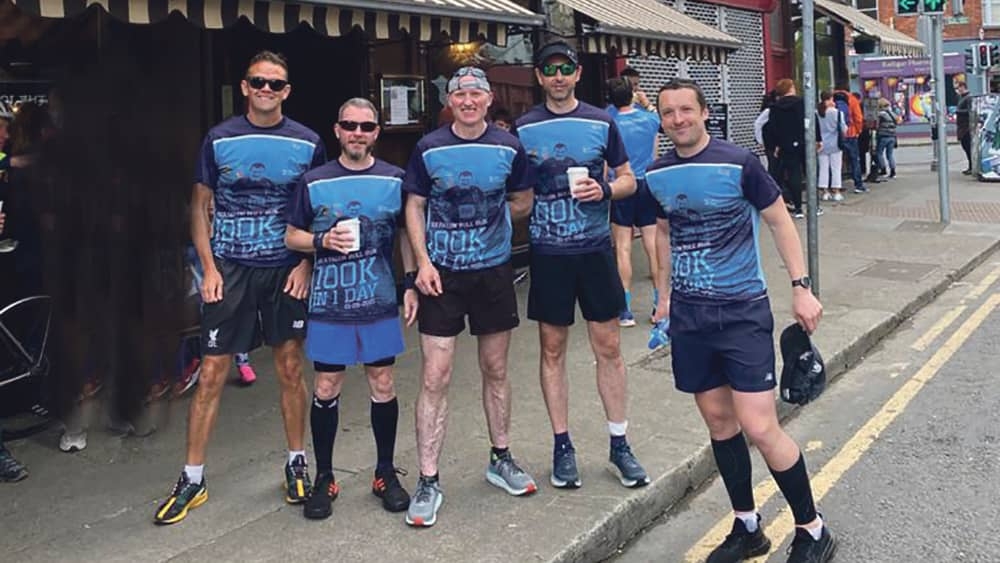 A GROUP of friends from St Jude’s GAA Club in Templeogue ran 100k in memory of their friend Mick ‘The Bull’ Fallon on Saturday – and raised over €23,000 for the Blackrock Hospice.

Mick, who was affectionately known as The Bull because of his strong build, passed away last January aged 49 after a long illness and he received care in the Blackrock Hospice.

A familiar face to many at St Jude’s, Mick played gaelic football and hurling and also coached for the club.

Mick’s friends and clubmates Richie Doran, Clint Storey, Sean O’Sullivan and Neville O’Boyle took on the 100k challenge, called the Mick Fallon Bull Run, in its entirety, while other runners took part in the event by running 5k or 10k distances.

Richie told The Echo: “The Bull Run definitely caught the imagination of the community and we had a huge following on social media during the day.

“It was a real community effort. There was lots of togetherness and encouragement, it was really positive at all stages.”

Over 40 runners took part at various points, running in pods of four, covering St Jude’s, Clontarf, Rathgar, Stillorgan, Marlay Park and Tymon Park during the course of the day.

While a final figure wasn’t available at the time of going to print, Richie said that over €23,000 had been raised for the Blackrock Hospice – significantly more than their initial target of €8,000.

When asked how the organisers felt when they realised how much money had been raised, Richie said: “We were thrilled and delighted.

“We’re very proud of what we did, because we know that hospices have been struggling with their funds due to Covid.

“But, in one way, the money was secondary. Our main focus was on doing the run in memory of Mick Fallon.

“He was such a huge personality within the community, he was a person who made everyone feel very special in his company.

“His passing has left a huge void in the lives of his family and friends.”

The Fallon family were presented with a ‘Mick Fallon Bull Run 100k in 1 Day’ jersey by the Bull Run organisers in Tymon Park after the end of the run.

Looking ahead, Richie said he wasn’t sure if the Bull Run would be an annual event, but he said he and his clubmates plan to hold yearly events in memory of Mick Fallon.