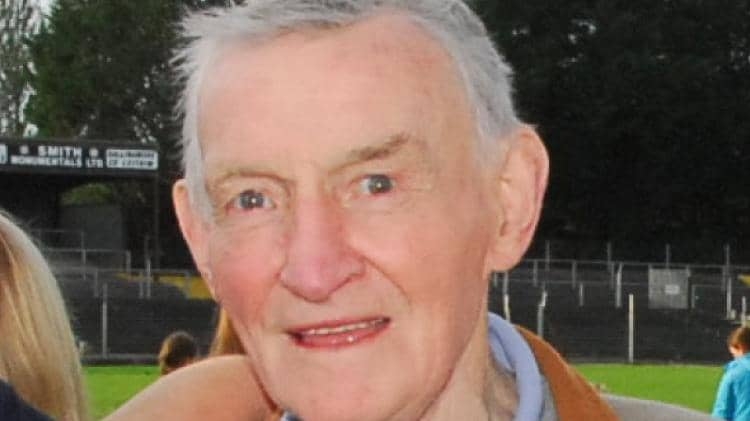 TRIBUTES have been paid to GAA ‘legend’ Packie McGarty, who sadly passed away this week.

Patrick Joseph McGarty, who has always been known as Packie, passed away peacefully at home surrounded by loving family on April 6, 2021.

He was beloved husband of Ellen and much-loved dad to Christine, Jean, Padraig, Michael, Mary, Aileen and Eamonn and grandfather to 10 grandchildren.

Packie was born in Gorvagh, just outside Mohill, and played senior football for Leitrim for 23 years, before finishing off his career as a full forward in Clondalkin with Round Towers.

Many have shared touching tributes online, naming Packie as one of ‘the best footballers of all time’ and ‘one of the finest GAA players of his generation’.

In a statement on their website, Round Tower GAA paid tribute to Packie: “Round Tower GAA Club is deeply saddened to learn of the passing of Patrick ‘Packie’ McGarty. We extend our condolences to his family and friends. Packie played with Round Tower from 1964 until the early seventies and operated a shop at St Brigid’s Road. He played senior football with Leitrim for 23 years.”

Packie playing back in his Leitrim days

Round Towers GAA Club Vice President, Bernie Cronin, told The Echo: “He was an absolute gentleman, he wasn’t a big man, but he had a tremendous leap, and he was very fast and very accurate, and he was a very clean player. He was without a doubt one of the greatest of Round Towers.”

An excerpt from the Round Tower GAA’s ‘Club Legends’ profile published back in 2016, summarised Packie’s talent.

‘Anywhere GAA supporters meet, and you mention that you are connected with Round Towers, the name Packie McGarty comes up with people enquiring about the brilliant forward.’

Packie was well known and much-loved in Clondalkin for both his love and talent in sport and also from owning the grocery shop on St Brigid’s Road, which he purchased in 1964 and was subsequently sold in 1998, before he moved to Terenure with wife Ellen.

Packie continued playing for Towers until the early seventies and was inducted into the Leitrim Hall of Fame in 1983 and was also awarded with a Hall of Fame award Leitrim Sports Partnership in November 2015.

He is also the only Leitrim player to make the Connacht Team of the Millennium and was named on the best football team never to have won an All-Ireland senior medal in 1984.