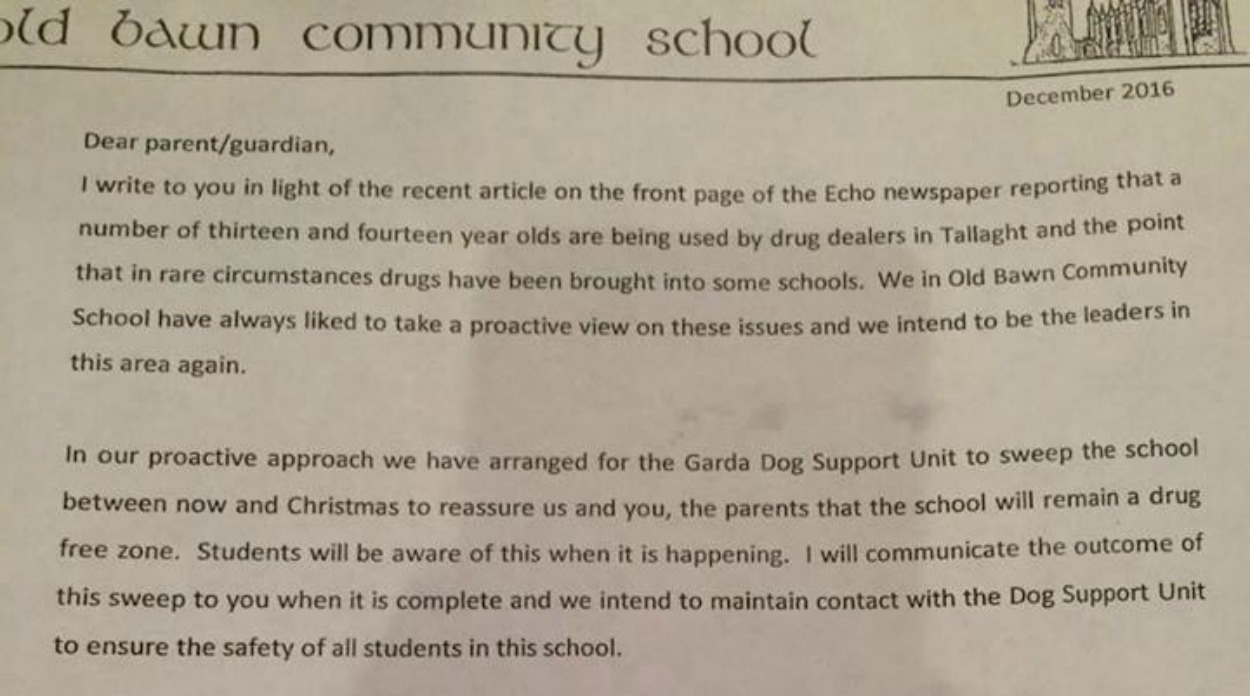 THE Garda Dog Support Unit is sweeping a Tallaght school next week, in a preventative and pro-active measure that aims to deal with the issue of drugs in schools head on.

This week, the principal of Old Bawn Community School (OBCS), Paul Crone, informed parents of a number of measures being undertaken to keep the school a ‘drug free zone’, which includes the Garda Dog Support Unit sweeping the school between now and the Christmas holidays – alongside a number of educational programmes for both students and teachers in the New Year.

In his letter to parents, which the Echo has seen, Mr Crone said that preventative measures were being taken in light of an article in The Echo, which reported that teens are being lured into drug-running activities – which has resulted in illegal substances making their way into a number of Tallaght schools.

While there has been no incidents reported in OBCS, Mr Crone said that the school has “always liked to take a pro-active view on these issues” and that they “intend to be leaders” and tackle the issue “head on and out in the open”.

Speaking to Echo.ie, Mr Crone said: “We’re looking to reassure staff, the Board and parents that OBCS is a drug-free zone.

“It’s about giving reassurance to parents and protecting the young people that attend the school.

“We’re one of the best performing schools in the area when it comes to students progressing onto third level education and alongside protecting the students, we want to also protect their education and support them in continuing to perform well… illegal substances seriously reduces a young person’s education opportunities.”

After reading the article in The Echo, Mr Crone contacted the area’s community gardai, who organised for the Garda Dog Support Unit to sweep the school next week.

“The school has a great relationship with the community gardai, and they regularly come in to talk with the students about issues such as anti-bullying”, Mr Crone said.

“The gardai have organised the sweep and will also come back into the school in January and February to educate staff on what they need to look out.

“We have also received support from YODA [Youth Drug and Alcohol Service] and the Dominic’s Drug Project, which will run a programme with [3rd to 6th year] students on drugs and how to be resilient and make the right choices.

“We’ll be running these programmes in January and February and as drugs is a delicate issue and people can be afraid to talk, students will be broken up into small groups.

“I have to say that the support we have been given is amazing, one of the best places in the country for support is here in Tallaght.”

Mr Crone stressed that under the school’s Code of Behaviour, that any student in possession of illegal substances will be expelled.

Any parents or schools with questions around this issue can contact Tallaght Garda Station on 6666000 or visit the Tallaght Drugs and Alcohol Task Force website, www.tallaghtdatf.ie, where a directory on youth services is available.