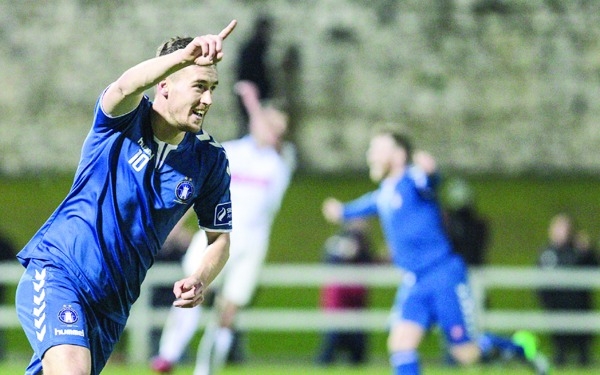 ON THE brink of what would be one of the greatest seasons for Limerick FC, Blues player Aaron Greene from Tallaght believes this team has the potential to really make a go of it in the Premier Division next season.

Unbeaten in the league all year, Limerick wrapped up the First Division title with six games to spare after they edged out UCD 3-2 at the Belfield Bowl on Sunday.

Martin Russell’s side turned a one-goal deficit on its head thanks to goals from John O’Flynn and Paul O’Conor before Maxim Kouogan restored parity for the homeside.

Yet with 13 minutes remaining, O’Conor tucked away Shaun Kelly’s delivery into the box to clinch the win for the visitors and with it the First Division prize.

And the adventure does not stop there for the team as they gear up for the EA Sports Cup decider on September 17 when they face St Patrick’s Athletic- the only team to get the better of them this season when they met in the FAI Cup.

Delighted at how his first season at Limerick has gone so far, Greene told The Echo “That [winning the First Division] was our main objective at the start of the season and while we were unbeaten all the way through it wasn’t easy.

“A lot of hard work went into winning this division and getting the club back to where it belongs in the Premier.

“They’re a really good bunch of lads. We’ve got players who have been playing in the league for a long time and some young lads as well, so there’s really a great mix.

“We’ll need one or two more players for next season. For me Dundalk and Cork are so strong. None of the Dublin teams can compete with them and that just shows you how far ahead they are.

“Collectively as a team we’re very strong. We’ve been beaten only once by Pat’s [in the FAI Cup]and I felt that was one that got away.

“But we’ll be looking to put that right when we get them to Markets Field for the [EA Sports Cup] final.

“For a First Division club to do a double would be incredible and it would mean so much to the supporters here.

“I’ve really enjoyed my football here and I want to keep working hard for the team.

“We’ll be sitting down at the end of the season, but for now I just want to help this team make it a double” he said.