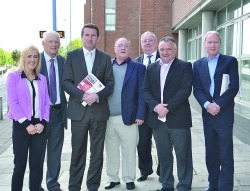 week expressed to the drugs minister, Aodhán Ó Riordáin, with workers also stressing that 800 people were in treatment in Tallaght last year, the highest number for any area in the capital.
The Minister of State at the Department of Justice, Aodhán Ó Riordáin, who has special responsibility for the drugs strategy, visited Tallaght on Monday - during which, he met with the Tallaght Drugs and Alcohol Task Force (TDATF) and the Swan Family Resource Centre, Fettercairn, JADD [Jobstown Assisting Drug Dependency] in Jobstown and CARP (Community Addiction Response Programme) in Killinarden.

With a population of 100,000, Tallaght ranks eight highest on the interim funding chart – despite having the highest number of people across Dublin’s 13 task force areas in treatment in 2014.
Over recent years, the progressive and responsive nature of Tallaght-based drug projects has been impeded on by a raft of cuts, which have left projects and staff concerned over the sustainability of programmes.
Grace Hill, TDATF co-ordinator, told The Echo: “We appealed to the Minister for additional funding and stressed how project are under-resourced, especially with the addition of alcohol – which we received no extra resources for.
“Sustainability is a key for projects.
“We want to start a new strategy plan this year and identify areas to develop and the local emerging needs.
“In the past, Tallaght’s drug projects have been successful due to their ability to respond to emerging needs however, this is very hard to do now with limited resources, the changing face of misuse and the size of the task force area – we’re very limited in what we can do per population.”
She added: “It makes sense for the government to invest in drug projects.
“Drug projects do work and they enhance life not just for those with addiction but the entire community – and in the long run will save the state money.”
The TDATF is also in a unique position in that its co-ordinator position is not paid for by the HSE, as with other task forces.
The money for this role has to be found in the task force’s annual allocation, a strain which has left the task force without a development worker since 2007.
Ms Hill added: “Alongside talking to the minister about what we believe is needed, we also introduced him to three of our projects and the work that they do – and what they could potentially do if they were invested in.”
Dublin South West TD, Pat Rabbitte said: “The drugs strategy does need to be elevated onto a new plane.
“Drug use has ravaged the fabric of communities and I hope that after the meeting in Tallaght that a new impetus will be given to the drugs strategy.”