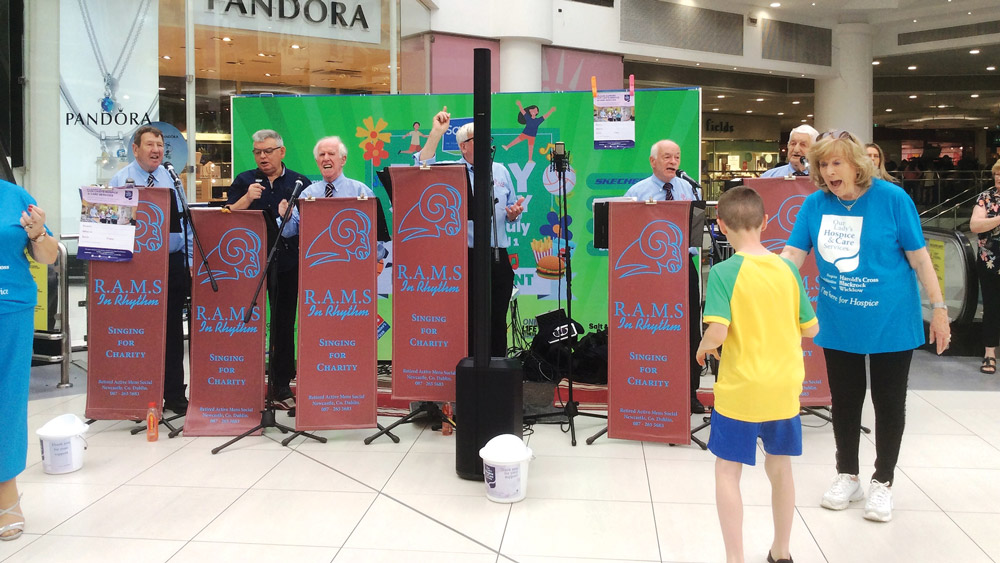 RAMS performing in the Square

Harmony to help the hospice: R.A.M.S. in rhythm perform in The Square

The members of a retired men’s choir based in Rathcoole recently performed in The Square Shopping Centre in Tallaght to the delight of shoppers and staff.

The Retired Active Men’s Social (RAMS) in Rhythm choir performed in aid of Our Lady’s Hospice Harold’s Cross and raised €1,850 for the service.

Shoppers who were on Level 2 of the shopping centre on Saturday, July 9, were treated to the choir’s performances of many hit songs, like ‘Wagon Wheel’ and ‘Say You Love Me’.

Matt Dowling from RAMS in Rhythm said: “Eight members of the RAMS group sang for almost three hours, to the delight of The Square patrons, staff and shoppers.

“The Level 2 main concourse was almost full of spectators, enjoying the singing, music, and the craic.

“It was a delight to see shoppers lilt along the aisles, while we sang some of our favourite numbers.”

While RAMS in Rhythm take great enjoyment from performing, it’s almost always with a charitable aim, and their performance in The Square was no different.

According to the group, a considerable sum of money was raised as a result of their Tallaght performance, which will be donated to Our Lady’s Hospice in Harold’s Cross.

“It was with kind permission from the management of The Square Shopping Centre, that facilitated the RAMS to sing and fundraise for the Harold’s Cross Hospice,” added Matt.

“The generosity of the patrons, customers, staff and shop owners, was so overwhelming that a large sum of money was donated to the hospice.”

The group also performed in Avoca in Rathcoole last weekend, to raise funds for their local branch of St Vincent de Paul.

As for the group’s plans over the coming weeks and months, Matt said: “With such a warm welcome from The Square Shopping Centre, we, the RAMS in Rhythm, are again invited to sing there in the near future, and to carol-sing at Christmas.

“The RAMS will have a recess in August, but we will continue with the singing for local nursing homes, Peamount Hospital, and at our members’ birthday celebrations.

“The RAMS group meet every Thursday morning in the community centre in Newcastle, and new members over 60 years of age are most welcome.

“The Retired Active Men’s Social is a group of over 50 men, who socialise, sing, fundraise, do gardening in the local community, support other local groups, celebrate members’ 80th and 90th birthdays and, most of all, enjoy ourselves.”