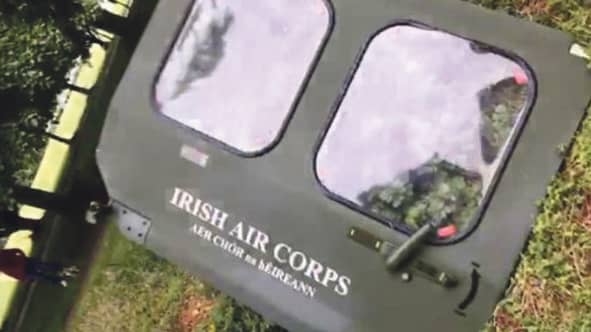 THE Air Corps helicopter that dropped a door 800ft into the grounds of Moyle Park secondary school in Clondalkin last May, was the same aircraft from which a different door detached 11 years ago.

A preliminary report on the incident confirmed that the AgustaWestland helicopter was the same chopper that lost a different door in 2009, while transporting then tourism minister Martin Cullen to an event in Killarney.

The report states that the 14-year-old helicopter had originally been on its way to collect a patient for a transfer to Tallaght Hospital in May.

It said: “While routing to Casement, the right door of the heli became detached over Clondalkin and fell to the ground in Moyle Park College.”

On the flight prior to the accident, there had been five people on board the chopper — three crew, an advanced paramedic and the patient who was being transferred. When the door fell off, only two pilots and a crewman were on board.

The report was prepared for then Minister of State Paul Kehoe by Brigadier General Rory O’Connor, and said the door hit the roof of an unused building before falling to the ground.

“There were some teenagers in the area. However, none were hit by the falling debris.”

By the time the helicopter returned to Casement, the Defence Forces had already received a call from a member of the public.