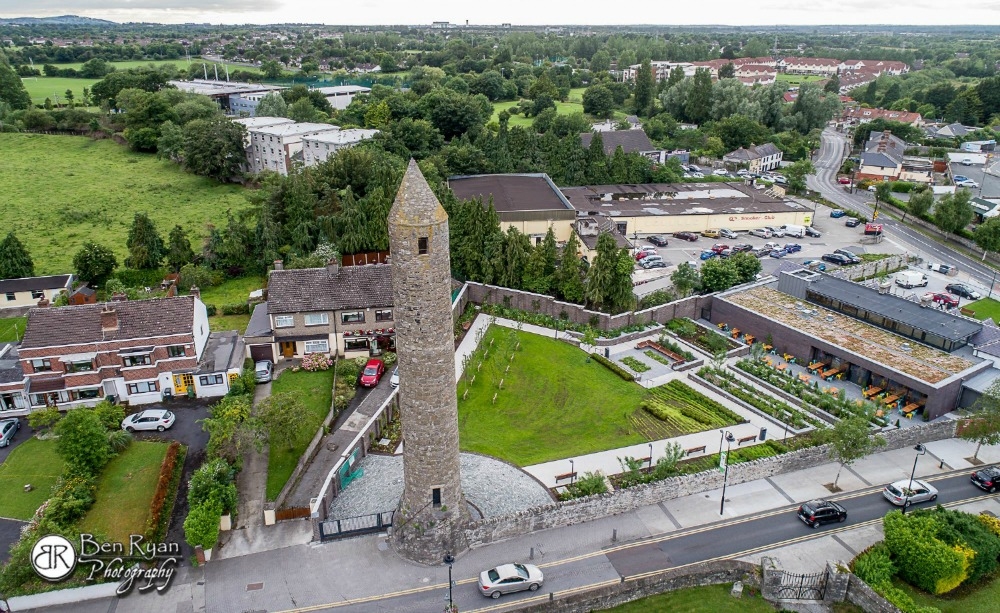 With the Clondalkin Round Tower open to the public (tickets required) this weekend, there’s a lot of speculation not only about what this Tower looks like from the inside, but why it was built and what purpose it served.

The Round Tower holds a special place in the hearts of many locals. Marnie Caddle is one of the founding members and secretary of the Rally Round the Round Tower group.

As part of the Clondalkin Heritage umbrella group, Rally Round the Round Tower was set up in 2004 and successfully prevented potentially destructive commercial development around the Tower.

Speaking to the Echo.ie, Marnie explained her and Rally Round’s 13 year commitment to having a visitor centre next to the 1,000 year-old tower.

She said: “When I walked in last Thursday, my stomach was full of knots. After 13 years of trying to see this dream come true, I was scared of what it might look like.

“There were tears when the other volunteers and I saw it. It was just lovely.”

After a tour of the visitor’s centre and exhibition, it’s easy to see why this 7th century monastic tower is so beloved by Marnie and others in the Clondalkin Heritage Group.

Here are 10 things you probably didn’t know about the Tower:

1. The Clondalkin Round Tower might be the oldest of its kind in Ireland.

Most historians agree that Clondalkin’s Round Tower is the oldest surviving Round Tower in Ireland. Round Towers are a uniquely indigenous form of Irish architecture. This near-perfectly preserved tower is said to be approximately 1000 years old but may in fact be as much as 1200 years old.

Clondalkin Round Tower miraculously survived an explosion at the Gunpowder Mill in Moyle Park in 1787. The explosion was so massive it was felt in the city centre – it blew out windows on Usher’s Island, Dublin 8 – but the Tower was unscathed.

If you pop down to the museum, you’ll be able to recreate the explosion yourself.

3. It was a target for Vikings.

In 1014, Brian Boru’s troops ransacked the Viking town, prior to the battle of Clontarf.

4. Tower history has travelled to Germany.

The Tower would have housed a Scriptorium – a place where monks produced and illuminated manuscripts. A portion of a manuscript produced in Clondalkin, known as The Clondalkin Mass Book, survives today in Karlsruhe Library in Germany.

5. The Tower was a popular tourist spot for the aristocracy.

Clondalkin Round Tower was considered a “must-see” item for aristocratic gentlemen of the eighteenth and nineteenth century on their tour of Ireland.

There are many paintings and illustrations of it by famous antiquarians including Samuel Molyneux (1725) and Berenger and Wakeman (1843).

6. It’s managed to stand up despite its shallow foundation.

The Tower is built of local ”calp limestone. It has a very shallow foundation, approximately 1 metre deep, and stands directly on a bed of calp limestone.

Clondalkin Round Tower is the most slender of all the Round Towers in Ireland. It is 27.5mts (90ft 6ins) in height with a circumference of 12.7mts (41ft 8ins).

7. The buttress is a later addition.

The buttress around the base of the tower is unique and is not a feature of any other tower. It was not part of the original structure and we are not sure when it was added.

It may have been an early addition when it was discovered that slender towers were less stable. Marnie said: “A number are reputed to have fallen down in storms!”

8. Some of the floors were removed.

There were originally six floors in the tower. The stone corbels that held the wooden floors can still be seen on the inside of the tower. Today there are four floors.

9. Its previous owner was a Saint.

The Tower formed part of the monastery of St. Chrónáin Mochua, a reputed healer from Connaught. The Annals, or records from the year, report that in 790 relics of St. Chrónáin and St. Kevin of Glendalough were displayed in the Tower.

It is uncertain whether the relics were the bones of the saints or perhaps some of their possessions.

10. You can celebrate the Feast Day of St. Chrónáin Mochua in August.

The Feast Day for the founder of the monastery in Clondalkin, is celebrated on August 6th. It was traditional to walk from the Round Tower in Clondalkin to Tobair Mochua in Celbridge on the eve of the feast day.

In commemoration of this, the Round Tower Heritage Group now have an annual event known as Slí Chrónáin.

People from Clondalkin walk along the Grand Canal in the direction of Celbridge and meet walkers from Celbridge at Gulliardstown Bridge. This year’s Slí Chrónáin takes place on the feast day itself on Sunday, August 6th.