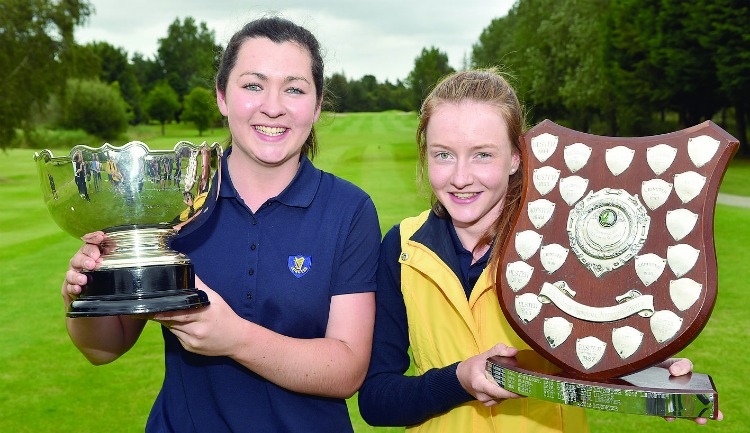 TWO golfers from Hermitage Golf Club Ciara Casey and Kate Lanigan played their part as Leinster claimed both the Women’s and Girl’s interprovincial titles at Shannon Golf Club on Thursday.

Lanigan and her playing partner, racked up six wins out of six, both with her foursomes partner Millt-own’s Ellen O’ Gorman, and in singles competitions in the Girls event.

The Leinster Girls squad squared off against Ulster on the opening day.

Lanigan who plays off a handicap of five, beat Royal Portrush’s Emma Forbes and Rossmore’s Kate Dywer in the foursomes and narrowly saw off Forbes again in the singles, with only one hole separating them in the two closely fought matches.

In the Women’s matches, it was a mixed day for Ciara Casey as she helped her playing partner, Mary Doyle from The Heath Golf Club in Laois, triumph by a one hole margin against Calndeboye’s Jessica Ross, and Malone’s Louise Coffey, but lost to the latter in the singles 6&4.

The next day it was Munster who fell victim to the eventual champions.

Her Hermitage clubmate won 4&3 against Killar-ney’s Kelly Brotherton and Shannon’s Lisa O’ Shea in the Foursomes, but then lost 3&2 to Sarah Cunningham of Ennis Golf Club, as Leinster women secured a 4 ½ to 3 ½ win.

On the third and final day, the Hermitage and Mill-town pair saw off Sligo’s Maeve Rooney and Portumna’s Sineád Lohan 5&4 in the Girls Foursomes.

Lanigan then defeated Chloe O’ Connor of Roscommon Golf Club by two holes in the singles to help Leinster to a 6-2 win over the westerners.

The Women’s matches saw Casey lose to Ballin-robe’s Shannon Burke and Anne McCormack of Naas 2&1 in the Foursomes, but she made up for it later by seeing off the challenge of Woodbrook’s Clodagh Hopkins by 7&6.

Lanigan will now be turning her attention to this week’s Irish Girls Close Championship in Mallow.