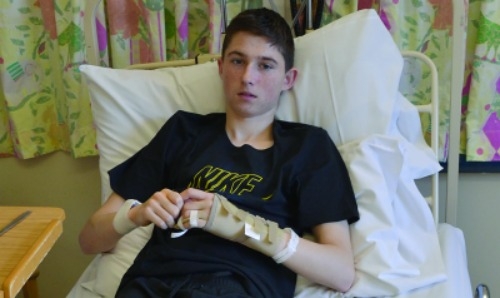 Heroic teenager had to undergo three hours of life-saving surgery

ARRESTS have been made in relation to a series of brutal knifepoint muggings in Tallaght, one of which saw a local teenager stabbed while trying to help a woman who was being violently mugged.

The Echo understands that three men were arrested on Tuesday by Tallaght Gardaí in connection to a number of vicious muggings across the area, including an afternoon knife attack on a female pedestrian in Springfield on Thursday and an incident in Sundale on Friday evening, which saw a woman and a brave 16-year-old hospitalised.

Glenshane resident Patrick O’Sullivan (16), a Leaving Certificate student with Mount Seskin Community College in Jobstown, is this week being hailed a hero after he came to the assistance of a woman who was being mugged in Sundale on Friday – during which he received a stab wound to the abdomen.

Patrick was visiting his grandparents’ house in Sundale for a family birthday when he left to walk his cousin to the bus stop at around 8pm.

His mother Marie Davidson told The Echo: “Patrick left his Nanna’s to walk his cousin to the bus stop and on the way back he saw the woman pull up to a house in her car.

“A couple of seconds later, he heard screaming and turned around and saw a man pulling out of the lady. He ran back to try and help her and got into a struggle with the mugger.

“This is when he got stabbed, but he didn’t realise he was injured until he made an emergency call for the lady – who had serious injuries to one of her hands.

“I think he was in shock over how quickly everything had happened, he even ran after the mugger, who eventually got the bag and escaped on a push-bike.”

The stab wound that Patrick received cut an artery in his abdomen and a number of blood vessels, which resulted in severe internal bleeding.

However, after undergoing three-hours of life-saving surgery, the local hero is on the mend in Tallaght Hospital – where a hairline fracture to his hand, received after he hit the mugger, was also treated.

“We are all so proud of Patrick, but we nearly lost our minds when we got the news that he had been stabbed,” his mam Marie said.

“He’s a good kid and is always willing to help, and he has said to me in recent days that maybe people will now see that their perceptions of teenagers are not necessarily a reflection of what teenagers think or feel on the inside.”

The Echo understands that the woman who was mugged is still quite shaken by the ordeal and will have to undergo a skin graft to her hand.

Last Thursday, another female was targeted while walking past St Mark’s Church in Springfield at around 3pm.

Once again, her bag was grabbed by a mugger, who, like the incident in Sundale, was carrying a blade and made his getaway on a push-bike.

Renua coun-cillor Ronan McMahon, who knows the victim, told The Echo: “It is shocking and very disturbing that this can happen in broad daylight and that the culprits are so brazen.

“We need more investment in Gardaí in Tallaght. They are poorly resourced and are not visible on the streets and estates of Dublin South West.

“I will be calling for a second Garda Station in Tallaght and for more resources to be assigned to the area. The size of the present Garda Station is not big enough to cater for the area, Tallaght needs a new or sub-station.”

A senior Garda source confirmed to The Echo that three males were arrested on Tuesday in connection with a number of muggings in the Tallaght area, including the incidents in Springfield and Sundale.

The source said: “Investigating officers believe that a number of incidents are connected and three males were arrested and questioned in relation to a series of muggings in the areas.

“They have since been released pending a file to the DPP.”