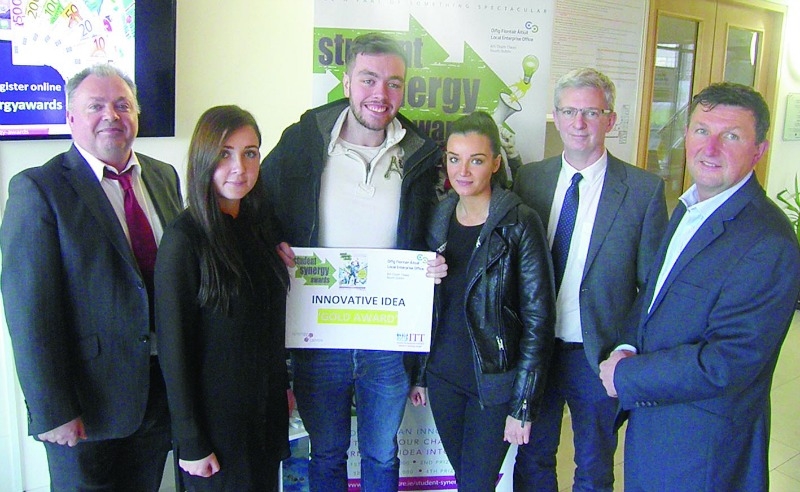 A WIDE range of well-researched potential products and services, were to the fore during the annual Synergy Student Awards at IT Tallaght.

The awards are part of an initiative the Synergy Centre have run on the ITT campus since 2008, with sponsorship from the South Dublin Local Enterprise Office (LEO).

Participants were selected from 40 entries for the annual awards, which are proving more popular each year.

So far 134 students have registered their interest for 2016/17 programme.

The final round of the competition saw an awards ceremony on December 8.

“Once again we had a varied mix of ideas with goods and services and a combination of both,” said Onray Brainard, Enterprise Support Officer, Synergy Centre.

Second place and a prize of €250 went to marketing student Jason Kavanagh, for his pet tracking device.

Judges acknowledged Jamie McMahon for his micro-brewery, and Josho Nandy-Wismans, Kyra Schep, and Lina Chaghouri, for their student campus App.

Onray said: “Thanks to our judges and faculty who have worked hard on this competition and contributed behind the scenes. Special thanks to all our students for taking part in this ITT student exclusive competition.

“Regardless of the outcome of this round, we still encourage students to keep at it and look at the business plan phase of the competition in 2017. We are offering €6,500 in cash to winners with a top prize of €2,000.

“In addition we want to prepare students to win the Enterprise Ireland national competition which has a total cash prize fund €30,000.”

The Synergy Centre will have more workshops and competitions to follow in 2017, details can be found at www.synergycentre.ie/student-synergy-awards.