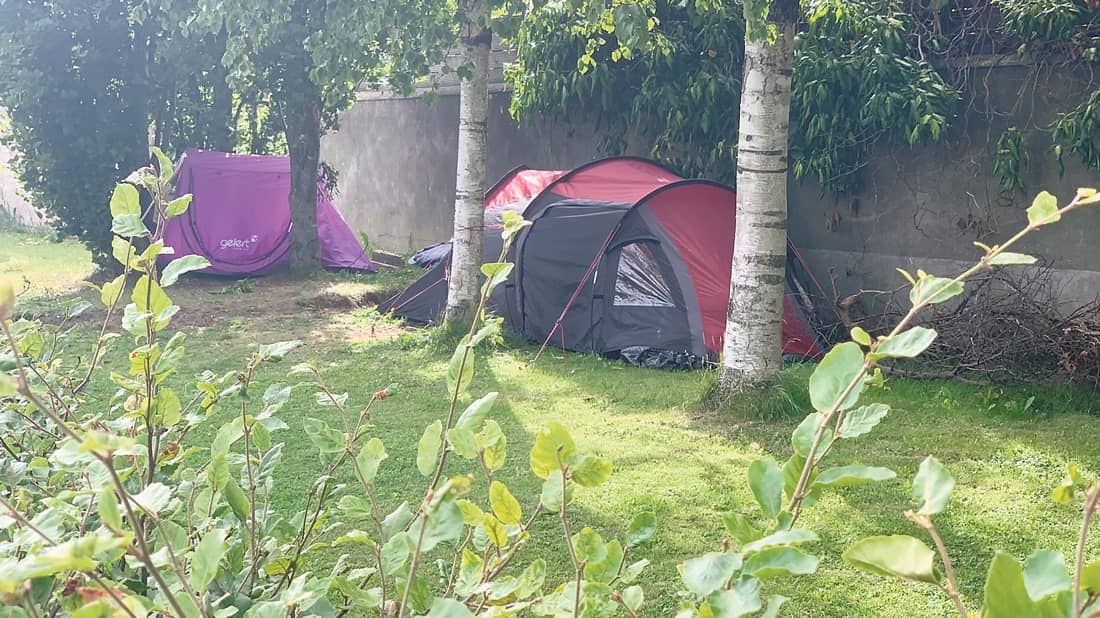 Homeless on the streets of Tallaght

A WOMAN who has been sleeping on the streets of Tallaght over the course of the COVID-19 pandemic has described how she feels “invisible”.

“The amount of times I’ve got ignored or blanked, even if I just want to ask somebody the time,” she explains. “They won’t even look at me.

Tents homeless people are living in

“I feel like I’m invisible sometimes and I’ll be sitting there, I’d be sitting there . . . I’d be a pretty happy-go-lucky kind of person like ‘it’s lucky I don’t have confidence issues anyway’.

“It can get really hurtful.”

The woman, aged in her thirties, has been sleeping in a tent with her partner on a patch of grass next to a busy road in Tallaght since April.

Over the course of the pandemic, they initially did not realise the severity of the situation until the usual places where they bought food shut down.

But it is the feeling of isolation that has been the biggest challenge.

“Isolation, like you know everyone is staying away from everyone,” she said on the Local Voices podcast.

“Even when you’re in town . . . Inner City Helping Homeless would come out to feed you at night.

“They’d be wearing the big suits.

“If you were asleep in the doorway and you woke up and you seen the van, and them in their suits, it was like something from another dimension coming to kidnap you.

“But we didn’t realise just how serious the whole Covid-19 was ourselves because we wouldn’t be watching the news or nothing like that.”

When The Echo went to meet up with her last week, she had a cut across her eye with bruises on her body after being assaulted on her way back from the JADD Project in Jobstown, where she goes for breakfast a few days every week.

She explains how a lot of people have been great help to them, just stopping to have a chat, providing them with hot water or letting them wash their clothes.

Karen McEvoy, from VISIT, a homeless service in Tallaght, has been cooking meals for the couple in the evenings.

In recent weeks, the woman has suffered numerous counts of abuse, with children also throwing objects at their tent.

“I was up at the shop trying to get money for dinner yesterday and a girl tried to steal my cup and threw hot coffee over me,” she recounts.

“Today, I was jumped by two girls because they wanted my phone and this is just not my life. It’s not . . . it’s hard.

“You do get a lot of abuse from kids around here as well, like kids that aren’t old enough to report or anything.

“Sometimes they’d be like 11, 12, throwing stuff as well like Doritos, jars and bottles and stuff at the tents at night-time and that’s quite hard too.”

Thirty-one people who were experiencing homelessness have died in Dublin so far this year, which is up in comparison to the number who died in the previous years.

The couple were living in the Phoenix Park before moving to Tallaght four months ago to get away from how much they were being pushed to buy illicit substances.

“You can’t walk down the street without getting offered drugs about 20 times, even in Tallaght,” she says.

“We came out here because it’s literally less, it’s terrible in the city centre.

“It is a struggle but I’m very headstrong . . . I want more for myself.

While speaking to The Echo on the Local Voices podcast, she asked to remain anonymous because she felt as though she would be discriminated against if potential employers knew she was homeless.

As of June 2020, there were 557 on South Dublin County Council’s homeless register – that figure includes singles and families.

She explained how they are struggling to get recognised because they have not lived in Tallaght for an extended period of time, being advised to first find work.

She said: “They won’t accept us on the housing list, even though I have connections to Dublin.

“My sister lives in Kiltipper and my aunty lives just across from The Square. I lived in Donegal with my ex-partner for 16 years and that’s why they’re telling us to go back to Donegal.

“But I can’t go back there because my son passed away there and I came down here.

“My son’s ashes are here and I don’t want to leave Dublin.

“Plus, all my work opportunities are in Dublin – and I want to go back to work.”

She had been working full-time as a door-to-door sales representative and was renting a property in Donegal while saving for a mortgage. Following a miscarriage last year, she turned to drug use as a coping mechanism for depression.

While battling with her mental health, she stopped going to work and ended up homeless – but she insists that hostels are not an option due to the incessant drug use in the facilities.

“A lot of people don’t understand – they don’t know what the background is and they’re so quick to judge,” she says.

“Me and my partner, we essentially weren’t using drugs when we became homeless, but we did end up falling into the trap of drugs.

“But we’re both now clean and we’re engaging in all the services and everything, but we can’t go into the hostels, that’s just a recipe for

“I don’t want to share a room with loads of girls using drugs cause when my son died, and I became homeless, I ended up falling into drugs.

“My father died of an overdose and I did end up using as well, but not for long thankfully.”

When speaking to The Echo last week on the Local Voices podcast, she and her partner were six weeks sober and in the hunt for jobs.

A spokesperson for the council told The Echo that any individual or family in need of homeless services can contact their homeless unit at: sdcchomeless@sdublincoco.ie

To listen to the full interview with the woman currently experiencing homeless, check out ‘Local Voices 014: Homeless during COVID-19’ at www.echo.ie/podcasts

NEWER POSTAccused torched ex-partner’s bin after finding her cheating on him
OLDER POSTNature on our doorsteps: Helping our butterflies