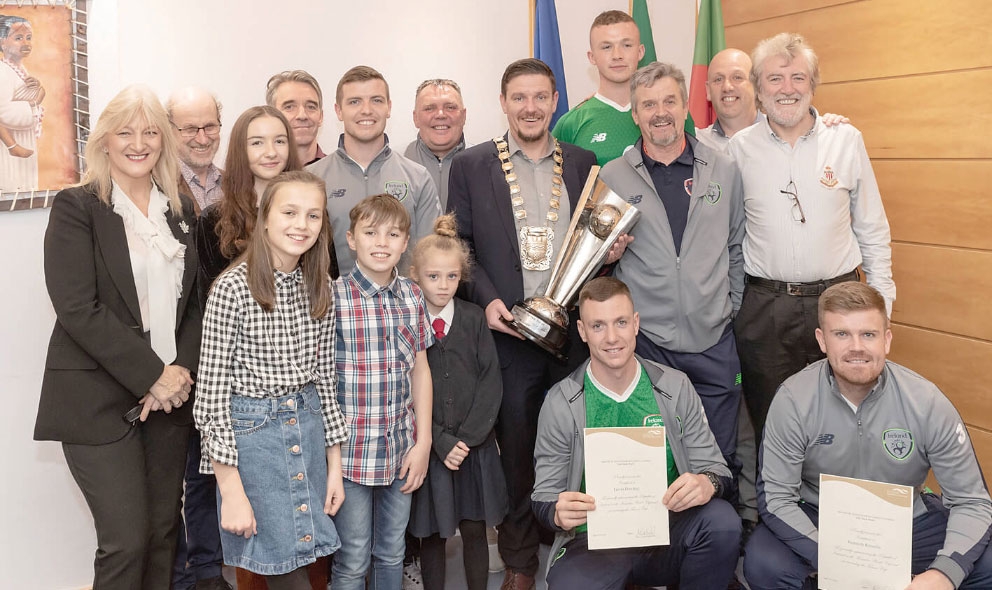 THE Irish Homeless World Cup team were honoured for their recent cup-winning achievements at a ceremony in South Dublin County Council.

At the Homeless World Cup in Mexico, the Irish team won the Telmex trophy, beating Romania 8-2 in the final and finishing a respectable 17th out of 40 countries in the tournament.

It is the first trophy the team have won at the annual tournament, but they have been highly competitive in recent years, often finishing in the top 10.

Thomas said: “The lads worked really hard and deserved their success in a quality tournament. They did everything I asked of them, and can be really proud of what they have achieved.”

“It is not often that Ireland comes back from a world tournament with a trophy, but this team deservedly did so – it is a fitting tribute to all involved,” said Kavanagh, team organiser.

The Irish team, which included Kenneth Kinsella (30), from Clondalkin, and Anthony Madden (38), from Tallaght,  enjoyed tourna-ment wins over Greece, Wales, Zimbabwe, Finland, Kyrgyzstan, Scotland and Romania, with Ed Madigan scoring a dramatic goal in the trophy fixture with the last kick of the match.

Mayor Mark Ward said he knew some of the management and previous players on the team through his work with drug rehabilitation group CASP in Clondalkin, and wanted to give them recognition for their achievements.

He said: “It is a testament to Sean Kavanagh that this programme has gone from strength to strength each year with leagues in Dublin, Galway, Limerick, Cork, Longford, Wexford, Waterford and Laois.

“I would like to also acknowledge coaches and other staff who tirelessly dedicate their time and efforts into making the street leagues the success that it is.”