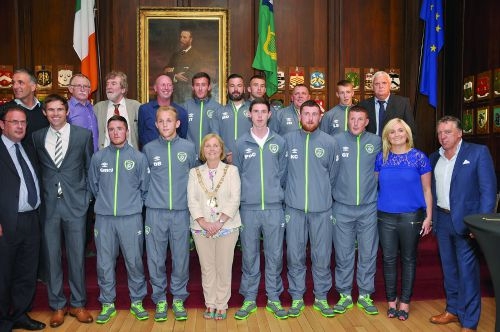 THE Irish Homeless World Cup squad were given a rousing reception at the Mansion House on Friday night.

Among those in attendance at Mansion Hall, were South Dublin County TDs Sean Crowe and Paul Murphy, along with a number of councillors and representatives.

Morgan, a Palmerstown resident, admits that the team faces stiff competition in their group against former winners Ukraine, and top European seeds Portugal in their first two games – followed by Switzerland, Denmark and Grenada.

“The lads are flying, and really looking forward to it now,” said Thomas. “One of the players broke an ankle and had to be replaced, but aside from that, everything is going well. They’ve adapted to the tournament rules. All the players have good feet and are comfortable on the ball.”

The Irish squad was selected from the Irish Street Leagues finals, which were held at the Postal Sports and Social Club in Tallaght last April.

Also honoured on the night, were players who participated in the 2013 world cup in Poland – including Karl O’Sullivan from Clondalkin.

The last three Irish teams have enjoyed successful tournaments at the Homeless World Cup – finishing 16th, 11th and 16th out of 48 teams respectively.

The Irish Street League helps transform the lives of individuals who have encountered difficulties and fallen on hard times – with sport the catalyst to rebuild their lives.

The Irish team requires sponsorship to send a side to the World Cup each year – understood to be in the region of €80,000.

Anyone who wishes to support the team can do so through info@irelandsissuesmagazine.com.

The team’s progress in the tournament can be followed at www.homelessworldcup.org, or at www.irishstreetleague.com.