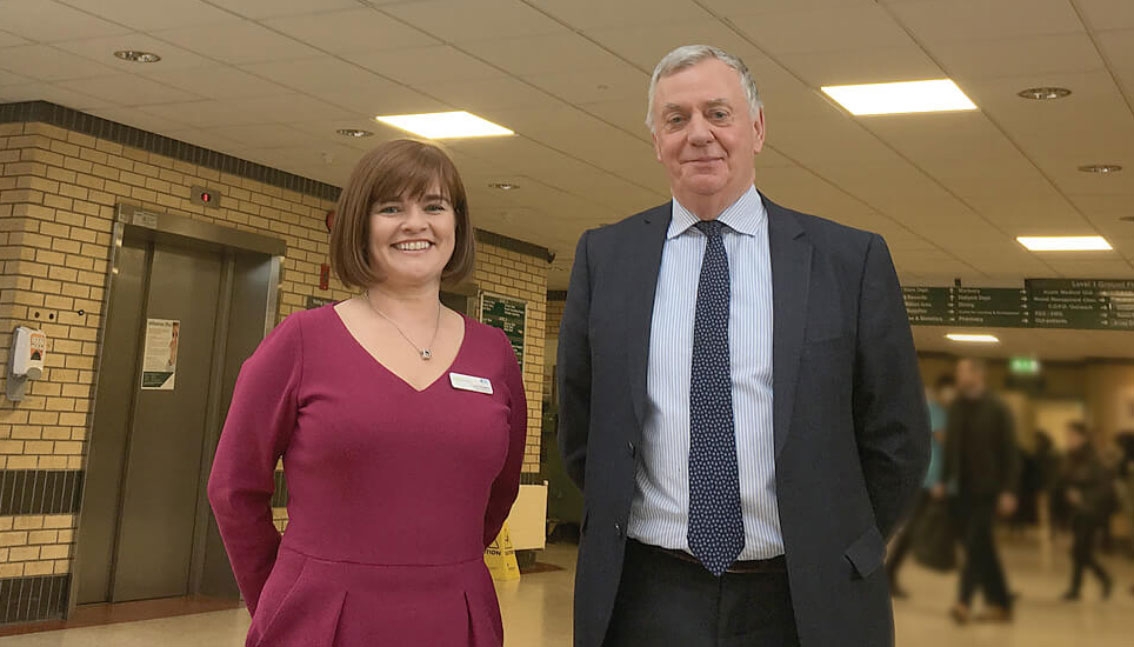 Hospital CEO looks forward to working with board and staff

TALLAGHT University Hospital has this week announced the appointment of its new Chief Executive as David Slevin moves on from the role after more than five years at the helm.

On Wednesday, the Board of Tallaght University Hospital (TUH) announced the appointment of Lucy Nugent as the new Chief Executive, after an open competition was initiated last November following Mr Slevin’s resignation as CEO.

New CEO of TUH Lucy Nugent with Liam Dowdall, Chairman of TUH board

It is understood Mr Slevin is taking up a new role in the Mater Private.

Appointed to the position of CEO in October 2013, Mr Slevin led the development of a number of key projects, some delivered, some still in motion, aimed at utilising TUH campus space, increasing capacity and improving patient experience and access.

These developments include the expansion of medial outpatient services off site in the community, a new Renal Unit on the hospital campus and an ICU expansion plan.

In a comment to The Echo before Christmas, Mr Slevin also expressed his confidence in the delivery of a hospital-driven proposal for a six-storey, 72-single room development on campus, which would also create a new home for the oncology and endoscopy department.

“I am confident that the ambitious approach taken by staff and the Board of Tallaght University Hospital will see support secured for the planned construction of a 72-bed inpatient wing onsite in the near future”, Mr Slevin said.

David Slevin was CEO at TUH for more than five years

Speaking on Mr Slevin’s departure, Fianna Fail TD John Lahart said: “At times of great pressure on hospital services and resources, David Slevin has been a resourceful and energetic leader of TUH whose constant focus was on the delivery of public health to the local and wider community.

“He has succeeded in considerably broadening the TUH footprint into the community and central Tallaght town geographical area.”

Taking over the reins from Mr Slevin is newly appointed CEO and former nurse, Lucy Nugent.

Prior to joining TUH, Ms Nugent  worked in a number of nursing roles, before working in the Acute Hospitals Division as Head of Quality Assurance and Risk Management, Clinical and Patient Services Manager in the Children’s University Hospital, Temple Street.

She is currently the President of the Health Management Institute and is its representative on the European Association of Hospital Managers.

Commenting after her appointment, Ms Nugent said: “Tallaght University Hospital is one of the country’s largest academic teaching hospitals but it is also an incredible community in itself.

“I am deeply honoured to take on the role of Chief Executive at what is, a very exciting time for the organisation.

“The various roles I have worked in leading up to this position provide me a unique insight into how a hospital works and more importantly the importance of working together as a team.

“I am looking forward to working with the Board, the Executive Management Team and all of the staff in continuing the improvements to our service development and ensuring TUH remains a Hospital and place of employment where ‘people caring for people’ is at the core of everything that we do.”

Congratulating Ms Nugent on her appointment, Liam Dowdall, Chairman of the TUH Board, said that the new appointment comes at a “very exciting” time for the hospital as it moves forward into a new year “with a number of planned service developments to enhance the delivery of high quality, safe treatment and care to our patients”.

Mr Dowdall also thanked David Slevin for his “valued service” and wished him well in his future career.