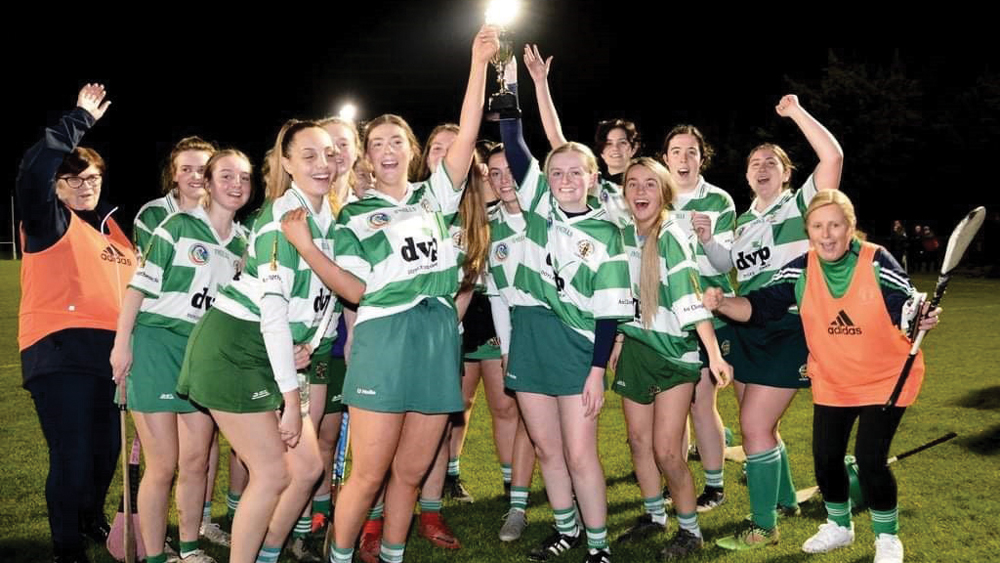 Round Tower celebrate winning the Under 20 Division Four Camogie Championship

A HAT-TRICK of goals from Player-of-the-Match Megan Hoyte inspired Round Tower to the Under 20 Division Four Camogie Championship title after they recorded a 4-14 to 4-4 win over Kevins at Monastery Road.

Having trailed for much of the game, the visitors made a bit of resurgence in the third quarter before the Clondalkin outfit turned up the heat in the final few minutes to run out 10-point winners.

Kevins made a rapid start when Leah Rowe-Ashe latched on to a nice ball from the throw-in, swiveled and placed the sliotar into the net.

Rowe-Ashe was a constant presence at full-forward, as was her sister Niamh at wing-back, who utilised her pace very effectively.

Yet that goal served as a wake-up call for the hosts, who have been notoriously slow starters this season.

The energetic Hoyte operated as the main lynchpin in the Tower’s attack and, in tandem with Kate Whelan, they rattled off several scores each.

Towers wasted no time whatsoever getting back into contention, going back down the other end to cancel out the goal through some excellent play from their dynamic duo of Hoyte and Whelan.

Both sides put on a clinic in camogie with the two sets of defenders standing out in particular.

Joint-captains Chloe Morris and Eibhlin Roebuck held the fort for Towers while Karla Meehan pulled off a couple of top saves to deny Kevins.

While the Towers frontline dazzled, they met their match going head-to-head with the likes of Kevin’s defenders Orla Jacob and Sophie Madden.

The Clondalkin outfit went into the break 1-7 to 1-3 ahead, but Kevins made up the ground quickly with Meadhbh Hick scrapping tooth and nail to reduce the deficit to two points.

Hick was brilliant at centre-forward, bagging herself goals and keeping the scoreboard ticking along from the deadball.

When Katie Donnelly started to get into the grove of things in midfield, Kevins were firing on all cylinders.

But in the final 10-minutes, Towers flexed their superior firepower as Hoyte and Whelan teed off on the Kevins defence, finding the net multiple times to put daylight between the teams and round off the win.

While Meadhbh Hick made herself a contender for the ‘Player of the Match’ Award with her stellar performance for Kevins, it was Hoyte’s game-winning play for Towers in that final quarter that earned the accolade.