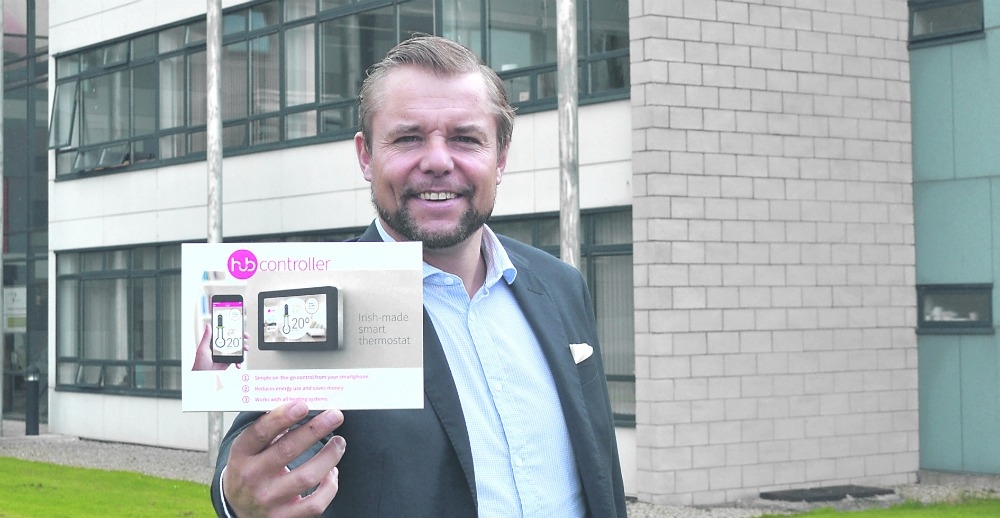 UTILITIY bills are set to continue to increase year after year, yet the average homeowner won’t see a similar trajectory with their monthly income.

Tech entrepreneur Ollie Hynes (45), from Tallaght, set out to challenge this anomaly back in 2015.

After a huge amount of development/research work and sacrifice for him and his staff - who essentially went without pay for close to two years - the Hub Controller smart thermostat was created in November 2016.

It can be installed in five minutes and enables people to manage their energy consumption remotely from their mobile phone, laptop or tablet.

The patented device has a battery which recharges itself, and is compatible with any heating system without the need to replace existing wires.

Of the 500 or so customers so far, Hynes says they have shaved an average of 31 per cent off their yearly bill – or €400 in savings.

“It will work in any home,” said Hynes, CEO of Hub Controller.

The eldest of 10 children, Hynes was inspired to create the device after seeing an energy provider try to shake down his younger sister a number of years ago.

Recently divorced, the mother of three was struggling to pay bills, behind on a few months, and feared being cut off.

“They offered her a pre-pay plan, but when I looked at the details, essentially she would have been paying 30 per cent extra per unit, and her yearly bill would go from €550 to €960,” said Hynes.

Having worked in the heating business for over 25 years, Hynes has an eye for small details.

“Everyone get’s a ‘ta-dah’ bill – where they can’t believe the amount,” he said.

“One time when our boiler was broken for six months I got a huge bill, and another big bill for my phone when I was in Cuba for a week. All you need is proof. I was able to track everything and show it to the companies, and receive a significant discount.”

This ability to track every little detail is contained within the Hub Controller, which also provides users with free updates, and gives advice on when they should change their utility providers by linking in with current deals offered by other companies.

“We expect to add electricity (to the HC) by mid-2018,” said Hynes, whose goal is to allow consumers to manage all their utility bills remotely.

“Research shows 60 per cent of people don’t switch their utility providers. Lots of people end up paying for energy even when they are not at home. People can continue to light cigars with €50 notes if they want to. For high earners, it may not be an issue, but with bills only going one way, many are on fixed incomes and need to shave some cost off their bills.”

After a colourful journey working for heating companies in the UK, Italy, Ireland, via recession, the dole queue, re-training/upskilling, support from Enterprise Ireland, and investors pumping in €2.6 million, Hynes has already fulfilled one major aspiration – to help households manage their energy efficiently.

The other major goal was to set up a company in his hometown.

Employing 29 staff in total, all aspects of the Hub Controller are developed and designed in the Synergy Centre at IT Tallaght, and manufactured at a plant in Rathcoole.

The firm employs a diverse range of employees, including Tallaght staff such as Hynes’s wife Katherine Noctor, Head of Sales and Marketing from Tallaght Graham Merriman, and Newcastle native Kim Cahill.

Ollie continued: “We’re never moving out of Tallaght. If I have to build a new premises I will. Also, if I could hire more people from Tallaght I would, but we just can’t find them. I’ve worked in a lot of places but always wanted to come home and start a business in Tallaght. I’m living the dream.”

The Hub Controller is now available at Woodies in Tallaght – costing €250 and €130 for installation. Readers can avail of free installation during the month of August by using the code ECHO-HUB-09W in store.