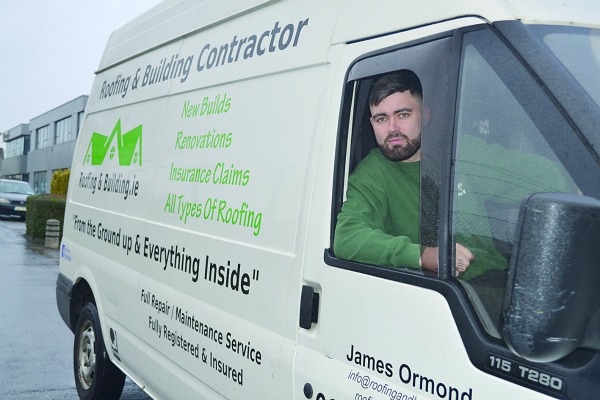 A ROOFER who publicly offered to carry out work for elderly people struggling financially - has received a tsunami of support thanks to the goodwill gesture.

Neilstown man James Ormond, owner of Roofing and Building.ie in Unit 3, Sunshine Industrial Estate , Crumlin Road - was initially going to donate to charity but decided to cut out the middlemen and go directly to those in need.

On January 17, James put up a message on his company Facebook account – offering to fix leaks for elderly people who can’t afford to pay – giving up his time and expertise to help one grateful pensioner per month.

Within days the post had reached over 1,500 people and generated positive responses from as far afield as the USA and Australia.

Whilst requests for work have also come in from around the country, James is only in a position to carry out free work in the South Dublin County and South Central areas – but he has already identified an elderly lady in Ballyfermot after a request from family members.

James said: “I just done it to help local people but I didn’t think it would go viral or that we would get such a massive response.

“I was going to donate to charity but you don’t know how much of the money actually goes to those who need it.”

He continued: “There was requests from places like Westmeath but I’m only in a position to do it for local people. I am thinking of doing a volunteer construction crew, for people who are out of work, and who would like to help out for other projects.”

James’s Facebook post has been flooded with requests and over 200 messages of support, residents praising the “wonderful gesture”, and one lady saying it has “restored my faith in humanity.”

He carried out his first pro bono job this week, fixing a leak that caused a Ballyfermot pensioner constant trouble for years.

James is actively looking to recruit other tradesmen and support, to provide work for elderly people across the county.