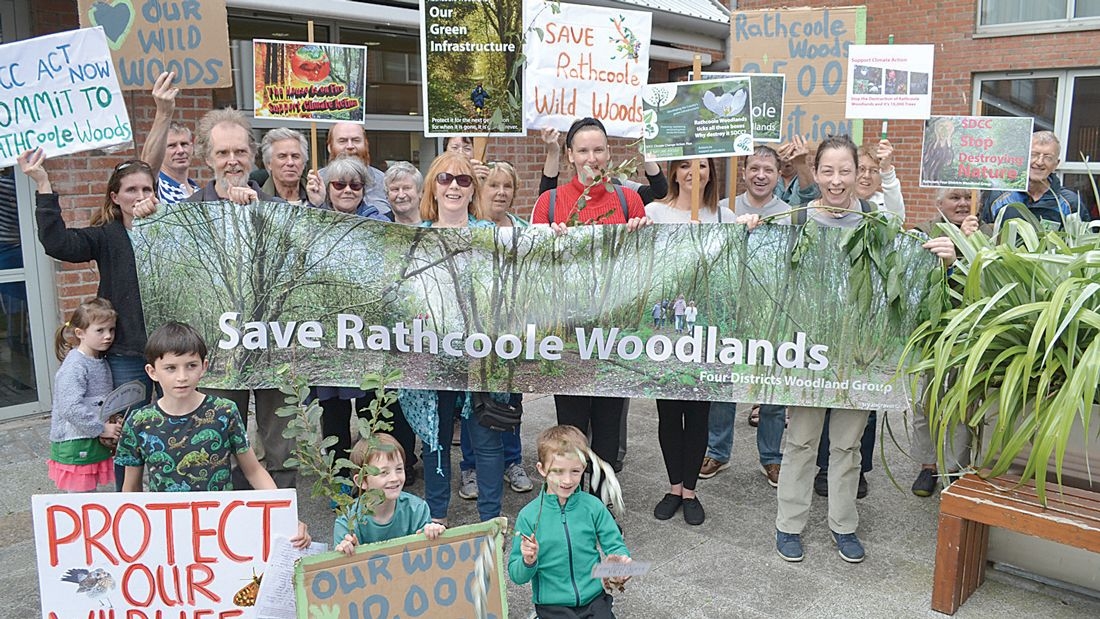 Huge support to Save Rathcoole Woodlands

Rathcoole residents and the Four Districts Woodland Habitat Group handed in a 2,500 strong petition calling on South Dublin County Council to protect a unique wild woodland habitat next door to Rathcoole and Saggart on Wednesday afternoon.

The council are drafting plans to clear the woodland to build 250 houses and in the process destroy 10,000 native trees.

Residents protesting outside council offices on Wednesday handing in their petition

This would remove an important resource for local residents as a recreational amenity as well as being a host to four bat species, badgers, frogs, ancient hedgerows and aquifers.

What once started off as scrub land in an abandoned and neglected council field has blossomed over the last 30 years to become a rich biodiverse area, home to many native wildflowers and woodland trees.

Alistair Mullan from the campaign says: “This council is attempting to railroad the local community with their housing plans. They have refused to give us permission to do a biodiversity study of the woodland which would show how amazing this habitat resource is for our community and the local wildlife, and all of it right on our doorstep.

Local resident Sally Graver says: “Wild areas are important to us, not only to mitigate the climate crisis, but also for our mental health and well-being in terms of quality space for walking, helping to reduce pollution and to help alleviate local flooding.

“How can the councillors allow the cutting down and removal of 10,000 young trees with a recognised deficit of trees in the county?”

Mr Mullan added “The devastation to the Tallaght wetlands last week is a serious blow for wild habitats.

“Re-wilded areas such as these are incredibly valuable for biodiversity and in combating the climate crisis, much more so than simply planting trees.”