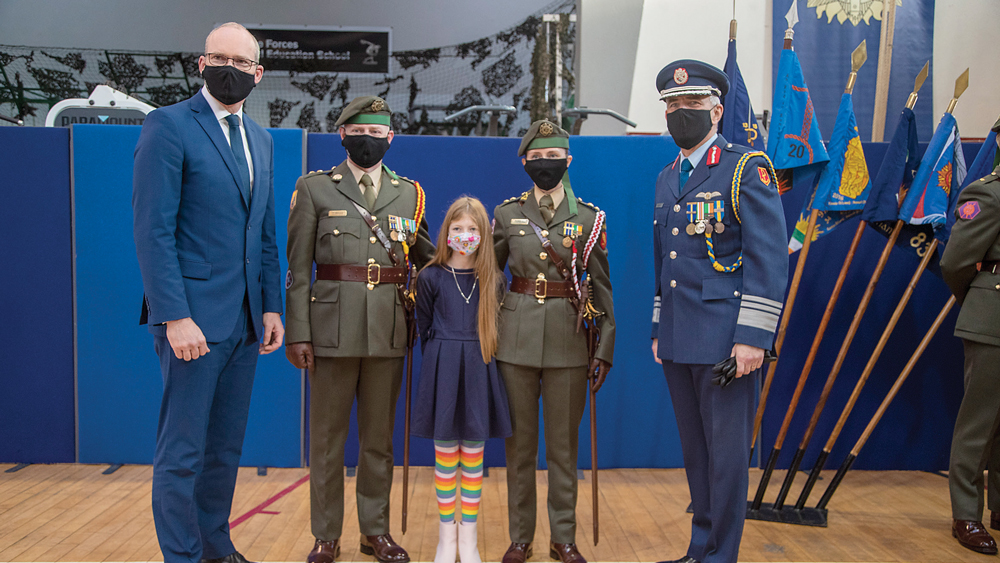 The Minister for Defence, Simon Coveney, TD and Chief of Staff of the Defence Forces, Lieutenant General Seán Clancy, with the Curran family

A COUPLE from Clondalkin graduated to become members of the 5th Army Reserve Officers after completing a leadership course at the Defence Forces Training Centre in Kildare on Sunday.

Ciarán and Laura Curran were joined at the ceremony along with 29 new army officers and the Minister for Defence, Simon Coveney, TD, and Chief of Staff of the Defence Forces,  Lieutenant General Seán Clancy.

The 29 officers who successfully completed the course will now start a new journey in leadership roles in units throughout Óglaigh na hÉireann.

The course was also an historic milestone in that it is the first one of its kind conducted in over a decade. The course was conducted over a three-year period, with the last eighteen months having been especially testing due to Covid-19. But students and instructors alike rose to the challenge by engaging in new and innovative methods of learning.

In receiving this Presidential Commission, the new officers took an oath of allegiance in which they will swear to be “faithful to Ireland and loyal to the Constitution”.